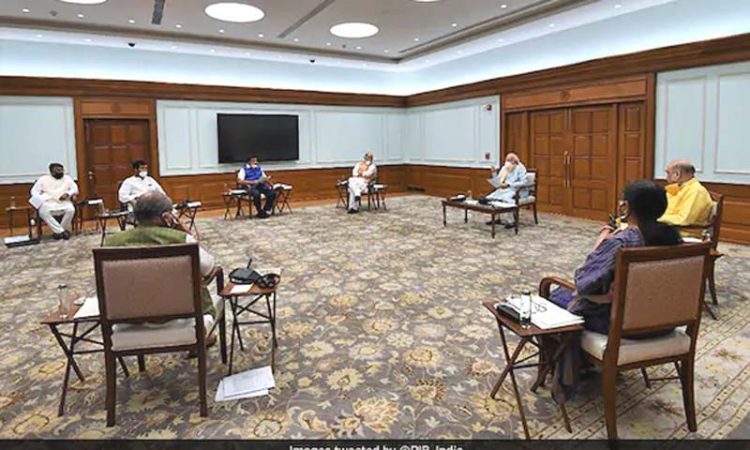 New Delhi, June 1: The Union Cabinet on Monday announced major steps taken to boost MSMEs, farmers and street vendors hit by the Coronavirus pandemic and the subsequent lockdowns.
The Union Cabinet at a meeting chaired by Prime Minister earlier today, approved Rs 20,000 crore subordinate debt for stressed MSMEs.
This will reportedly benefit 2 lakh small-scale industries, Union Minister Prakash Javadekar said at a briefing.
Union Minister Nitin Gadkari informed that the Cabinet has approved modalities and road map for implementing two packages for MSMEs – Rs 20,000 crore package for distressed MSMEs and Rs 50,000 crore equity infusion through Fund of Funds.
The turnover limit for medium enterprises has been further amended to Rs 250 crore and investment limit has been raised to Rs 50 crore. Further widening the definition of micro, small and medium enterprises (MSME), the Union Cabinet on Monday announced that entities with turnover up to Rs 250 crore or investment up to Rs 50 crore will qualify as medium enterprises.
Addressing the media here, post the cabinet meeting, Union Information & Broadcasting Minister Prakash Javadekar said that the decision was taken post suggestions coming in after the government announced the broadening of the scope of MSMEs to support and more businesses.
Also, the turnover criteria for MSME will not include revenue from exports further providing flexibility to the sector to expand their operations and push overseas sales, he said.
On May 13, Finance Minister Nirmala Sitharaman announced to increase of investment limits for MSMEs. Further, she had also said that an additional criteria of turnover has also been introduced for recognition of an MSME.
During that announcement, Sitharaman had raised medium enterprises definition to one with investment and machinery to the tune of Rs 20 crore and turnover of Rs 100 crore. This stands further enhanced now after the cabinet decision.
As per the new changes, businesses with investment of less than Rs 1 crore and turnover of Rs 5 crore would be classified as micro enterprises. Under the existing criteria, a company with investment of less than Rs 25 lakh in the manufacturing sector and less than Rs 10 lakh in the services sector were considered micro enterprises.
The Cabinet had changed this distinction as well and a unified criteria will be applied for micro enterprises.
The investment limit of small enterprises has been increased to Rs 10 crore, and the companies would have to have turnover of less than Rs 50 crore.
Under the Aatmanirbhar Bharat package, the government has done away with the distinction of services and manufacturing MSME.
These Cabinet decisions will aid MSMEs to attract investments and create jobs.
Briefing media persons about the Cabinet decision, MSME Minister Nitin Gadkari said that the changes would benefit 6 crore MSMEs that together employ 11 crore people.
Meanwhile, the minimum support prices (MSP) for 14 kharif crops have been increased by 50- 83 per cent to provide relief to the farmers.
Also, the farmers will get more time to repay their loans, i.e till August now, informed Union Minister Narendra Tomar.
MSP rate for Paddy now stands at Rs 1868 per quintal, Jowar at Rs 2620/quintal, Bajra at Rs 2150/quintal, and a 50 per cent increase in Ragi, Moong, Groundnut, Soyabean, Til and Cotton, for the year 2020-21, the minister said.
In a major relief for street vendors, the Cabinet has approved credit scheme for them. The Centre had last month announced a special credit facility of Rs 5,000 Crore for 50 lakh vendors.
This package has been named ‘PM SVANiDHI’ — Pradhan Mantri Street Vendor’s AtmaNirbhar Nidhi.
Union minister Prakash Javadekar said that the central government will give a loan of Rs 10,000 to around 50 lakh hawkers. A 7 percent relief for street vendors has also been announced.
Prime Minister Narendra Modi had in May announced a whopping Rs 20 lakh crore economic package — nearly 10 per cent of country’s GDP — for all segments including industries, workers, farmers, honest taxpayers, MSMEs, cottage industry among others.
The ‘Aatmanirbhar Bharat’ package has been focused on making India self-reliant amidst the Coronavirus pandemic and the subsequent weeks of lockdown. (Agencies)