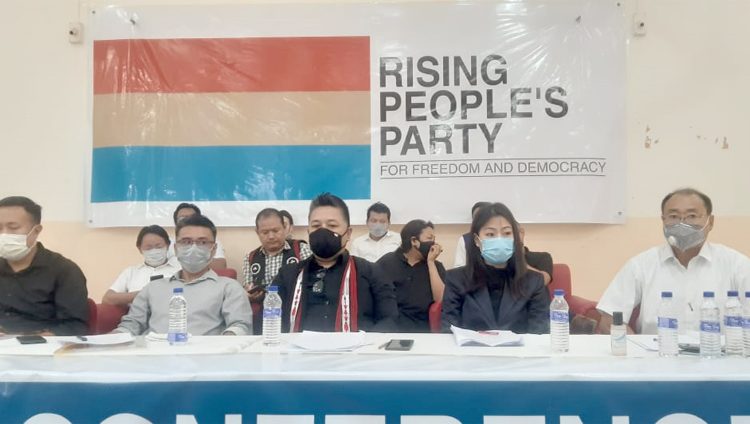 Leaders of RPP addressing a press conference at Dimapur on Saturday

DIMAPUR, JULY 3: Proclaiming its belief in a philosophy of ‘new wineskin filled with new visions and new ideas’, the Rising People’s Party (RPP) on Saturday announced its arrival in Nagaland’s murky political turf.
The Party will be led by Joel Naga, former Chairperson of the anti-corruption movement ACAUT. He is also the son of former Minister Nillo Rengma.

During a press conference here at Dimapur, where the Party’s leaders and core members were also revealed, Joel and his team shared their vision and aspirations.
“We have a dream; we have a vision for the Naga people. The (RPP) journey began last year on October 2, when we adopted our constitution, coinciding with the birthday of Mahatma Gandhi. Our vision coincides with the philosophy of Gandhi ~ a vision of self-reliance, sacrifice, and non-violence”, said Joel.
In a field dominated by old and wizened wineskins, the RPP President said that his Party will offer an alternative platform to the Naga people.
“The present political parties have disappointed us. The system has failed us. In fact, there is a rot in the system,” he said.
New social order
According to the Party’s statement, its nomenclature encompasses the emerging discourse of the Naga people voicing out and rising up against injustice.
“The party is for the emergence of a new social order, which is based on justice and equality”, said Joel.

The Party, he said, believes in 4 core principles: good governance, women and youth empowerment, rule of law and creation of self-reliant economy.
“We are committed to women and youth empowerment. We believe women should be in positions of power. They should be inside Legislative Assemblies, they should be part of the decision making processes, they should have a say in developmental processes. The youths are a frustrated lot, there’s no job opportunity, there’s disappointment everywhere. There is no rule of law. The culture of khushi-khushi is prevalent everywhere”, he said.
Former Miss Wokha, Dr. Abeny Khuvung, who is one of the 6 Vice-Presidents of RPP, said that women empowerment is an issue the Party will not give up on.
When asked for the Party’s stand on 33% reservation for women in ULB, she said there are enough instances of Naga women challenging the status quo.
“It’s taking time but this is an irreversible road we have chosen, there is no going back”, she asserted.

Again, according to the Party’s statement, one of its core beliefs is that women in politics and in positions of influence in governance will help in bringing down corruption in the State.
“Women constitute almost 50% of the State’s population and they deserve to be heard, there’s no doubt about that. But whatever the issue may be, we believe in constitutional processes and we will not indulge in violence. Whether it is reservation or any other issue, we believe that there is a process and we will abide by those processes”, said Joel.
On the economic front, the Party’s statement maintained that Nagaland State is not a private limited to be looted at will.
It stated that the Party envisages an economy from where a “thriving business middle-class” will emerge, and “Naga people control the economy of the State”.
Immediate goal
“Our intention is to set up candidates in 2023. But you have to understand that we are sowing a seed. And just like a seed, it takes time to grow, so only time will tell. Only our hard work or sacrifices will tell. Our immediate goal is, of course, to get into the Assembly as elected members”, Joel said.
In keeping with the ‘new wineskin’ theme, he said that the Party is looking only for fresh faces to represent it in the elections.

Vitho Zao, the Party’s Treasurer, said that the aim is to rouse the Naga people.
“We want to create a movement so that we wake up from the slumber and decide for ourselves. While going for the electoral process, we will appeal to the people to vote for the person who is going to serve them, without spending his money. It is our commitment to serve the people with honesty, accountability, and fear of G, he said.
According to Abeny, who was SVEEP Icon for Wokha District in 2015, people vote for certain candidates simply because they have no other option.
“We did a lot of education, sensitising about clean election to college students, youth and women. What I learned from my experience is that they have no option. They know, actually everyone knows what is what. But they did not have any option. This party provides opportunity for them to exercise their franchise rightly”, she said.
Systematic Voters’ Education and Electoral Participation (SVEEP) is a flagship programme of the Election Commission of India (ECI) for voter education, spreading voter awareness and promoting voter literacy in India.
In order to maintain transparency, Joel said that all the office-bearers have declared their assets, which is available in public domain.

“We want to declare to the Naga people that we have no money. We don’t believe in money politics. We believe in ideals and issues. We believe that the prayers of Naga people are enough to succeed in electoral politics. We appeal to the Naga people to believe in us and give us time to prove our worth. We appeal to the youth and women to join us, to journey with us, so that we can bring an electoral revolution. We appeal to the people to join us so that we can build a new Nagaland”, he said.
Rising People’s Party, with its motto: For Freedom and Democracy, was registered with the ECI on June 6 last. The Party has Amai Chingkhu as General Secretary and Naga actor, Zhokhoi Chüzho, as President of its Youth Wing.
(Page News Service)