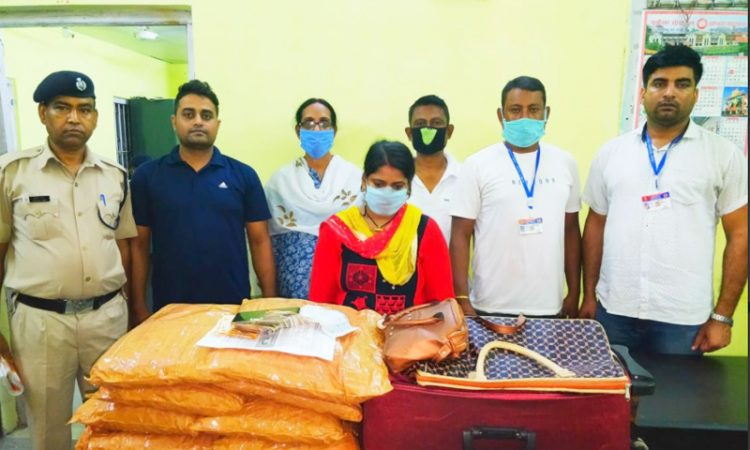 Guwahati, October 23: The Railway Protection Force (RPF) of Northeast Frontier Railway has seized 34.55 kg cannabis, apprehended two touts and rescued a minor girl in West Bengal and Assam during the last four days, an official said.
A team of RPF from Alipurduar had conducted a surprise checking at New Coochbehar Railway Station in West Bengal on October 19 and saw a woman trying to board the 02346 Guwahati-Sealdah Special carrying a big bag, said NF Railway spokesman Subhanan Chanda here on Friday.
On checking her bag, 14.05 kg cannabis were found along with Rs 13,460 in cash and one mobile phone, the NFR Chief Public Relations Officer said.
In another incident on October 21 a team of RPF conducted a search operation at New Jalpaiguri Railway Station in West Bengal in 02346 Guwahati-Sealdah Special and seized two unclaimed bags containing 20.5 kg cannabis.
In Assam another team of RPF apprehended one person for illegally procuring and selling railway e-tickets from a travel agency near Digboi station and seized 11 railway tickets worth Rs 43,231, one computer set, one printer and other accessories from his possession on October 21.
The next day yet another RPF team conducted surveillance at the computerised reservation centre in Guwahati Railway Station and apprehended one person for running an illegal business of procuring and supplying railway tickets.
The RPF team recovered two railway tickets, one xerox copy of railway ticket from his possession and found transactions for another two tickets in his mobile phone totalling Rs 5,640, Chanda said.
Earlier on October 14, on duty RPF personnel detected three persons with a minor girl at the computerised reservation centre in Guwahati Railway Station and detained them.
On enquiry, it was found that the minor girl was kidnapped and her father had reported the abduction, the CPRO said, adding, the suspected kidnappers revealed that they were planning to flee to Kerala by train along with the minor girl.
Later, the apprehended persons and the girl were handed over to Alopatti Char Police Station of Barpeta district, he added. (PTI)