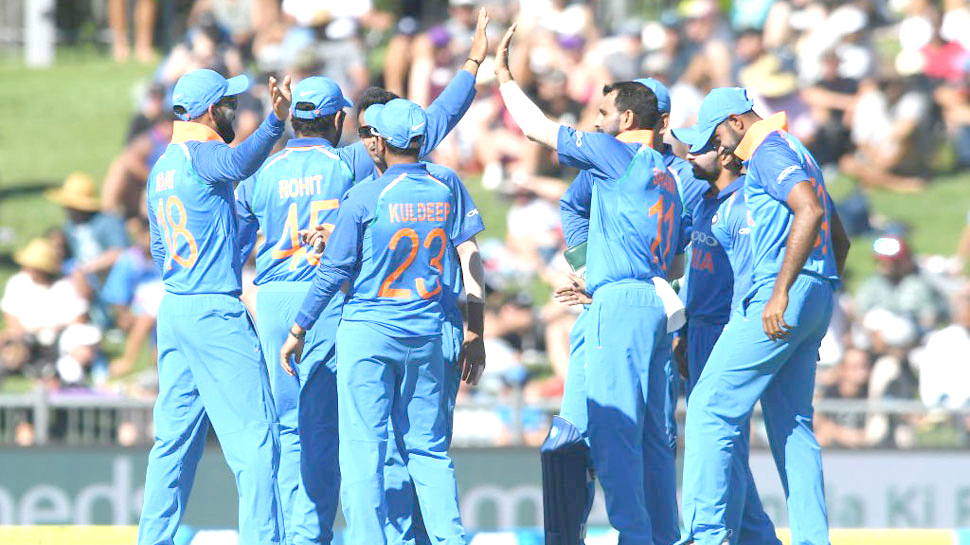 MOUNT MAUNGANUI, January 26: Wrist-spinner Kuldeep Yadav tormented New Zealand again as India coasted to a 90-run victory in the second one-day international at Bay Oval in Mount Maunganui on Saturday to take a 2-0 lead in the five-match series.
The left-arm spinner, who had four victims in the eight-wicket victory in the first match in Napier, claimed 4-45 as New Zealand were dismissed for 234 in 40.2 overs in reply to India’s 324-4.
All of the top-six New Zealand batsmen got starts in pursuit of a target of 325 that was achievable on a good pitch that offered true bounce and pace.
The hosts, however, were unable to really build any fruitful partnerships as India took wickets at times just when New Zealand appeared to be getting a slight edge in their pursuit.
Yadav destroyed New Zealand’s middle order as he dismissed Tom Latham (34), Colin de Grandhomme (three) and Henry Nicholls (28) in quick succession to end any hopes of them leading a rear-guard recovery.
The 24-year-old had the opportunity of taking his second one-day international hat-trick when he dismissed Nicholls and Ish Sodhi on successive balls only for Lockie Ferguson to deny him.
Recalled all-rounder Doug Bracewell, arguably playing for a place at this year’s World Cup in England, showed he had vastly improved his batting with a counter-attacking 57, his first ODI half century.
New Zealand’s inconsistent batting — they were unable to last their full complement of overs for the second successive match — was not the only concern for coach Gary Stead as India’s batsmen also highlighted the lack of penetration of their bowling attack.
None of the Indian batsmen looked like they were in trouble and with openers Shikhar Dhawan (66) and Rohit Sharma (87) scoring at almost a run a ball, the visitors should have really set a target in excess of 350.
While the opening pair were both dismissed by the end of the 30th over, India were still 173-2 and looking ominous only for New Zealand’s bowlers to change their line and length and mix up their deliveries to slow the scoring rate.
The visitors, however, were still able to steadily build their innings and surpassed 300 when former captain Mahendra Singh Dhoni (48 not out) and Kedar Jadhav (22 from 10 balls) closed with 35 runs in the final two overs.
The third match is also at Bay Oval on Monday. (Agencies)