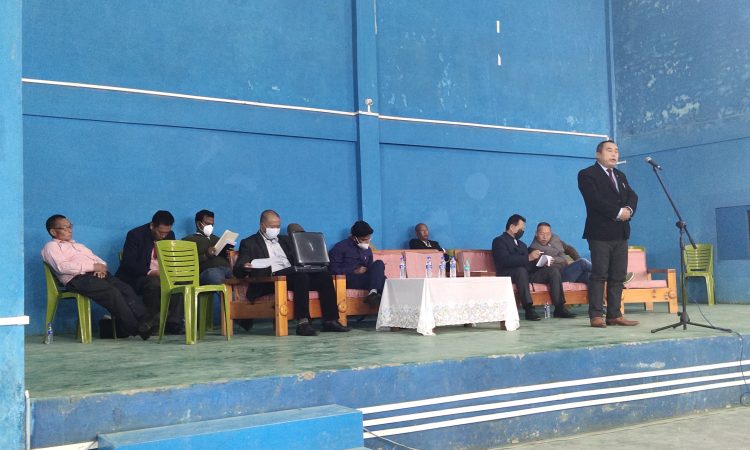 KOHIMA, OCTOBER 4: Nagaland Minister for Planning & Coordination, Land Revenue and Parliamentary Affairs, Neiba Kronu said that while education, water supply and health are important factors of development, road and power are more significant indices for development and progress to happen.
He was speaking at a consultative meeting on Kohima-Jessami 2-lane road with the district administration, law enforcement & implementing agencies and concerned public leaders of the villages, under Phek district, benefitting through a project at Pfutsero Multipurpose Hall on Saturday. It was convened by the Chakhesang Public Organization (CPO) to gain proper coordination from the villages and landowners.
Saying that road connectivity and power sector is of paramount importance for Phek district to move towards development and progress, he said as a legislator of the district, supported by the State Government, he approached the Ministry of Road Transport and Highways for 2-laning of the Kohima-Jessami road as the lifeline of Phek district.
With National Highways & Infrastructure Development Corporation (NHIDCL) Ltd as the implementing agency, the project has been sub-contracted as the State’s local contractors do not qualify to take major contracts in the Global tenders.
Maintaining that the road passing or touching the villages should consider themselves as benefactors, the Minister said, “We are all stakeholders and if we don’t cooperate it will be our own loss”.
He said village councils are the sole authority of the respective villages, which is also recognized by the state Government and therefore they should play the pivotal role of bringing together the landowners so that the development process is not hampered.
On the part of the Government, we will ensure that the road projects are completed in a time bound manner by the implementing agency without any disturbances, he said.
The Minister further requested the district administration, Chakhesang Public Organisation (CPO), and the land survey committee to complete the verification process at the earliest.
Kronu also informed the gathering that several other road projects including Chozuba-Phek, Phek-Meluri, Lozaphuhu-Avankhu and Pfutsero-Tadubi road have also been approved and works are under progress.
Informing that the Nagaland portion of Pfutsero-Tadubi road has already been completed, the Minister requested his counterpart in Manipur to give effort to complete their side of the road.
Appreciating the CPO resolution that uniformity of rate on compensation for damage property to be maintain without any bias by the implementing agency, he said though no land compensation would be given, the landowners would receive the value of the property damaged, including that of the paddy fields damaged in the process of road construction.
Interacting with media persons, an official of NHIDCL, the implementing agency said that the Phek portion of 109.32 km Kohima-Jessami road up to Lanye has been subcontracted into 5 packages and the works would start once the compensations are cleared.
The time for completion of packages 1, 2 & 3 from Kohima to Mesulumi village is 2 years and 4 and 5 from Mesulumi to Lanye is 18 months, he said.
CPO president Mikha Kenye said that the 2-lane road construction project from Kohima to Jessami is very dear and important to the people of Phek district.
“We cannot allow or tolerate any individual/groups with selfish motive to disturb the construction of the road,” said Kenye while appealing to all sections of people to extend their fullest support and cooperation to the concerned authority and the construction firms and see that the project is not disturbed by any person, group be it overground or underground.
Kenye also urged the implementing agencies and contractors to ensure that the quality of works are not compromised but strictly executed as per the prescribed specification.
Co-convenor CPO sub-committee on Kohima-Jessami 2-lane road, Welete Kapfo said that the committee would also supervise for the successful implementation of the project.
Phek Deputy Commissioner Sachin Jaiswal said that the district administration is only surveying the land while the rates of proper damage compensation are fixed by the technical team. He also requested the respective village councils to support the survey team with proper data and also identification of land owners. “We are trying to help the villages and land owners to possible extent but the village councils have major responsibility towards the success of the project,” he said.
Meanwhile, the meeting also endorsed the resolutions adopted at the joint meeting with all the affected villages and towns on August 29 last at Pfutsero, wherein it was resolved that uniformity of rate on compensation for damage property to be maintained without any bias by the implementing agency.
It reaffirmed CPO resolution No. 4 of June 29, 2020 at Phek town that unauthorized body, be it individual or a group of individuals having any grievances under the ongoing project that none is permissible to approach the administrative authorities unless it is routed through its own village/town council.
The meeting also endorsed another resolution that obstruction in any manner, by any village or town to hamper the developmental activities shall not be allowed.
Phek Superintendent of Police Vesupra Kezo, former CPO president Sovenyi and Timikha Koza, Chakhesang Mothers Association president Zhonelü Tunyi, representative from Chakhesang Youth Front, public leaders and representatives from the landowner villages also spoke at the meeting.
(Page News Service)