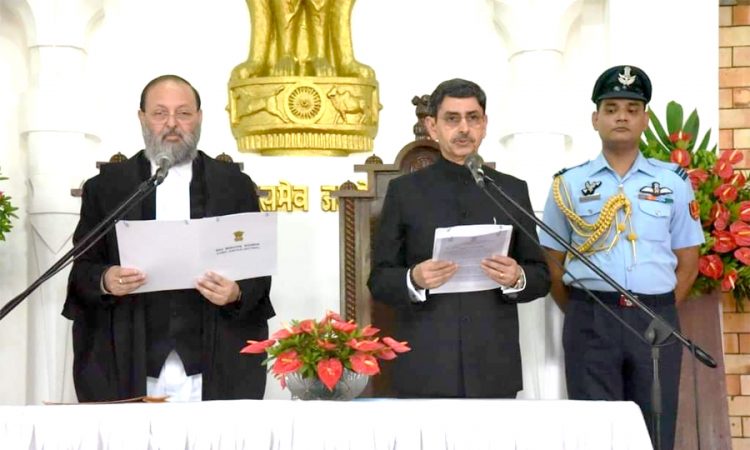 Says will endeavour to resolve Naga issue at the earliest

Dimapur, August 1: R N Ravi was sworn in as the 19th Governor of Nagaland at Durbal Hall, Raj Bhavan Kohima today.
Chief Justice (Acting), Gauhati High Court administered the Oath of Office to the Governor – Designate in the presence of the Chief Minister of Nagaland, Deputy Chief Minister, Speaker NLA, Leader of Opposition, Ministers of the State Government, Advisors, MLA, Senior Officers of the State and Central Government and other dignitaries. The swearing in ceremony was also attended by former Chief Minister and Governor, Dr SC Jamir, former Chief Minister KL Chishi and MP (Rajya Sabha) KG Kenye.
Chief Secretary to the Government of Nagaland, Temjen Toy, IAS read out the Warrant of Appointment.
The newly appointed Governor was then accorded a Guard of Honour by the Nagaland Police at the Raj Bhavan courtyard.
Addressing the people of Nagaland on assumption of office of the Governor of Nagaland, Ravi said early honourable resolution of Naga political issue has been at his heart and his endeavour would be to help resolve it at the earliest ensuring utmost honour and dignity to the Naga people.
I have been pursuing in mission mode resolution of Naga political issue since the day of assignment 5 years back, he said.
Ravi also expressed gratitude to President and Prime Minister of India and said he would remain steadfastly committed to his constitution responsibilities. He pledged to dedicate himself selflessly and tirelessly to the service of the people of Nagaland.
Ravi said the youth of Nagaland are among the best in the country and the world and they have excelled in whatever and whichever field they have gone into and service.
“My endeavour would be to help create an ecosystem of optimum opportunities for them here in Nagaland so that they not only help overcome the development differentials with the most advanced states of the country but outdo them,” he said adding, “In this mission, , I would like equal partnership of our mothers and daughters. They deserve urgent better attention in terms of health, education and entrepreneurship.”
He said never before in human history the mankind has witnessed such a revolutionary pace of growth. Stating that emerging technologies like Advanced Artificial Intelligence, Quantum Computing, Advanced Data Analytics, 5G network, robotics, genetics are the tools of profound change and growth today, he said his dream is to see the youth of Nagaland at the vanguard of all these technologies for the good of the people.
The newly appointed Governor said under the dynamic leadership of Prime Minister Narendra Modi, India is on way to fulfilling its long awaited destiny. The people of the country have revalidated and reinforced their trust in him with an unprecedented robust mandate, he said adding his mantra of governance, is “Sabka Saath, Sabka Vikas and Sabka Vishwas”.
He also called upon the people of Nagaland, specially the youth, to awake, arise and set the momentum of a resurgent Nagaland, a Nagaland that becomes a model for other states of the Indian Union to follow. (Page News Service)