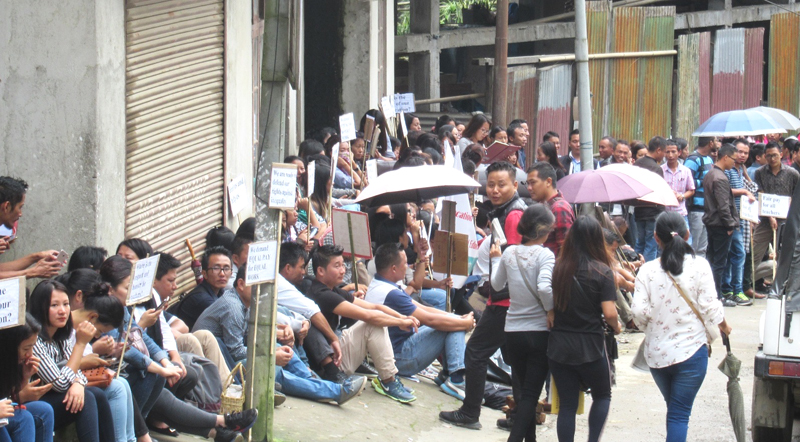 NRMSATA Batch of 2016 seen during their peaceful sit-in-protest at the tri-junction of Census office Bayavü, Kohima on September 4

Kohima, September 4: Even as the Nagaland Education Mission Society, Rashtriya Madhyamik Shiksha Abhiyan (RMSA) tried to justify the stand on decreasing the salary of RMSA teachers, more than 650 RMSA teachers under the aegis of Nagaland RMSA Teachers Association (NRMSATA) batch of 2016 resorted to peaceful sit-in-protest in Kohima today.
However, the District administration and police held the protestors at Census office junction before reaching the Directorate of School Education.
But the undeterred aggrieved teachers were seen holding placards some of which read: “How many bond/agreements will the RMSA 2016 sign?, “Let’s switch places, maybe then you will understand”, “Prices are soaring but our salary is declining”, “Agitation is becoming another subject in the school curriculum” etc.
However, DIG (Range), SP Kohima and district administration asked the leaders of the association to disperse peacefully stating that they have illegally (without permission) assembled and if they continue with their protest, it could result in unwanted situation.
Thereafter, the RMSA teachers did not have option but to disperse around noon.
The RMSA teachers called for the peaceful sit-in protest rejecting the office memorandum terming it as flawed and imposing with lots of disparity and discrepancies. They also demanded its revocation.
There have been claims and allegations from both sides, while the teachers were claiming that the office notification dated 28th October, 2015 has been kept confidential mentioning only point 4 and 6 to bind them which states that the department of school education shall clearly specify the terms and conditions of appointment in the appointment order indicating that the appointments are through funding under RMSA programme and that the state government will not be responsible for their salaries including future service careers of the appointees.”
A source from the state mission authority iterated that the terms and conditions have been clearly mentioned during their appointment, and stated its inability to meet any shortfall amount from the state resources. Hence, the sources asserted that it will stand by that decision.
Meanwhile, NRMSATA batch of 2016 president Sao Venuh said though the sit-in protest has been dispersed and the protest called off, the next steps of action would be decided soon. (Page News Service)