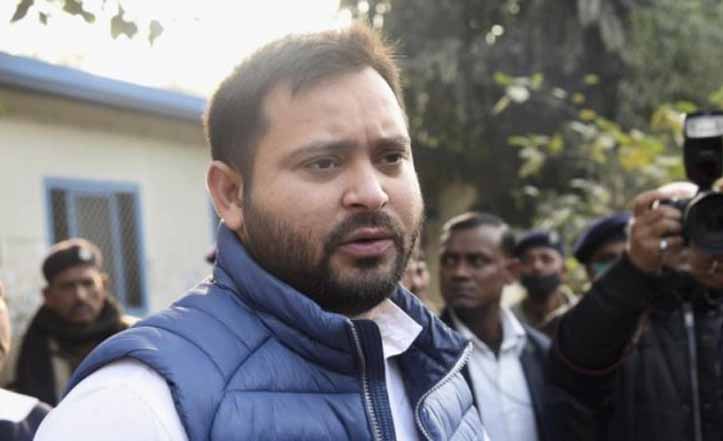 Guwahati, February 27: Rashtriya Janata Dal (RJD) leader Tejashwi Prasad Yadav on Saturday said his party will contest the upcoming Assam Assembly polls with the “like-minded” parties, a step seen as an effort to eat into votes of the BJP among the Hindi-speaking people.

Yadav, during his maiden visit to Guwahati, said he has already met Congress Assam chief Ripun Bora and will hold talks with the AIUDF to formalise the alliance.
“RJD has decided to expand its presence. So, we will participate in Assam Assembly polls… We’re talking to like- minded parties,” he said at a press conference here.
Yadav, the Leader of the Opposition in Bihar assembly, said apart from the Congress and Lok Sabha MP Badruddin Ajmal-led AIUDF, the RJD is in touch with other smaller parties.
When asked specifically if RJ will be a part of the Congress-led Grand Alliance in Assam, he said, “We are part of the UPA. Congress is our natural and old ally, and we are together in Bihar. We will join hands with those who believe in the Constitution.”
“There are around 5% Hindi-speaking people from Bihar, West Bengal, Jharkhand, Odisha and Chhattisgarh.
We have a considerable number of such people in 11 seats, but we’ll contest only where chances of winning are high,” Yadav, younger son of RJD supremo Lalu Prasad, said.
The Congress, which was in power for 15 years in Assam since 2001, has formed a Grand Alliance with AIUDF, CPI, CPI (M), CPI(ML) and Anchalik Gana Morcha (AGM) to fight the upcoming Assembly election against the BJP-led National Democratic Alliance (NDA).
Congress and the three Left parties of the grand alliance in Assam are already part of a similar anti-BJP coalition helmed by the RJD in Bihar.
RJD, which had earlier contested Assam polls alone without any success, is likely to cut into the Hindi-speaking votes that traditionally have been going to the BJP’s kitty.
The senior RJD leader also said he will travel to other poll-bound states like West Bengal, Kerala and Puducherry to campaign against the BJP and its allies.
Yadav, who has been chosen as the heir apparent of Lalu Prasad, is taking crucial decisions on behalf of the party in the absence of his father, facing jail term in connection with multi-crore rupees fodder scam in Bihar.
Attacking the ruling BJP, Yadav said the incumbent government is not concerned about the poor, unemployed youths, economy, farmers, students and women, but the only intention is to remain in power by “talking Hindu-Muslim politics”.
“All Constitutional institutions like CBI, IT, ED, RBI are no longer independent. These all are working as different cells of the party (BJP). Before the Election Commission announced the poll schedule, the BJP IT cell knew the dates,” he added.
Citing an example of Bihar, Yadav said all promises made by the saffron party there have failed and crimes in the state have risen 101% during the BJP-JD(U) government and “that is why Assam should not have the BJP government for the second time”.
“All out attempts should be that the communal forces inimical to the interest of Assam and India do not return to power. We should prevent it with all our forces. With that intention only, we are here in Assam,” he added.

On the three-phased election schedule in Assam, Yadav said, the state is seeing it for the first time in its history as usually polls take place in two phases here.
“More number of phases means deteriorating law and order.
Then who is to be blamed for this? Isn’t it the present government?” he asked.
Of the total 126 seats, elections to 47, mostly in Upper Assam, will be held on March 27, while 39 in Barak Valley and Central Assam will go to polls on April 1 and voting in the remaining 40 seats in Lower Assam will be held on April 6. (PTI)