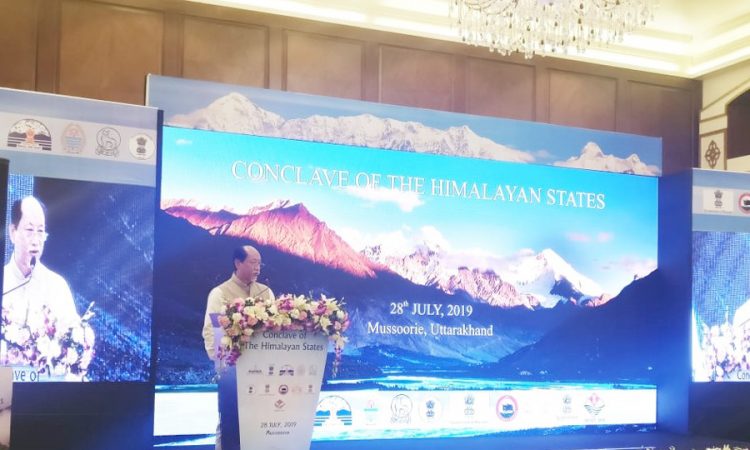 Dimapur, July 28: Chief Minister Neiphiu Rio today said that the mountainous and hilly Himalayan States of the country face various challenges due to its topography, harsh terrain and a number of other factors which contribute to development disability and urged upon the Government of India and the 15th Finance Commission to take these aspects into consideration while allocating funds to these States.
Speaking at the Conclave of the Indian Himalayan Region (IHR) States hosted by the Government of Uttarakhand at Mussoorie today in presence of Union Finance Minister Nirmala Sitharaman, Chairman of the 15th Finance Commission NK Singh, Vice -Chairman of NITI Aayog Dr. Rajiv Kumar and a host of Chief Ministers from the IHR States and officials of the Government of India, Rio reminded that the most important fact is that the hilly and mountainous States of the country are the sentinels of border security for the nation as all share sensitive international border with Pakistan, China, Myanmar and Bangladesh respectively which pose military and demographic security threats especially to the IHR States and the country. Besides this, all Himalayan States provide innumerable eco-system services to the nation like climate regulation, carbon sequestration etc. as well as act as the water tower of the country and therefore, special attention should be given by taking these factors into account.
Sharing his views on the devolution principles of the Finance Commission, the Chief Minister supported the proposal for increase of the share of taxes of States from 42% to 50% but added that in the context of Nagaland, even with this increase, Nagaland would still remain revenue deficit.
“In fact, it will only result in a corresponding reduction in Revenue Deficit Grant. Since the Share of Taxes tend to vary depending on actual collections, we have the apprehension that our receipts may fall below estimates even more than what it is now. My State has experienced negative receipts every year of the 14th Finance Commission period,” he said while supplementing his views.
Since States like Nagaland which are generally Revenue Deficit will not benefit from an increased share of taxes, Rio said that more benefit will accrue if the Commission agrees to fully cover the Revenue Deficit and also provide funds for critical infrastructure needs so that the infrastructure and developmental deficit we are facing are effectively addressed.
The Chief Minister recounted how the manufacturing sector in the State was contributing a substantial amount of Rs 14,123 lakhs to the State’s economy comprising 6.09% of the GSDP up to the year 1997-98. This suddenly dropped to Rs 6402 lakhs in 1998-99 and then to Rs 3362 lakhs in 1999-2000 shrinking to 1.32% of the GSDP. This is attributed to the judgement of the Supreme Court in WP (Civil) 202 dated 12th December 1996 in T.N. Godavarman Vrs Union of India and Others against felling of trees in the Northeast. The manufacturing sector that was somehow emerging in the form of saw mills, plywood and veneer mills and furniture making, could never make a comeback and till today the manufacturing sector in the State hardly adds about 1% to the State’s economy, Rio stated.
“This is the price paid by the State for the sustenance of the forest cover at the behest of the nation. It has however, never been accounted for, or compensated by any of the Finance Commissions or the Government of India. Conservation and preservation of the ecosystem is not without cost and this cost can only be understood the people who pay the price. Their voices have therefore, to be heard with patience and understanding and appropriately redressed,” the Chief Minister added.
The Chief Minister further suggested that since the Conclave was being held on the common uniting ground that the participating States fall under the Indian Himalayan Region, it would be more appropriate to replace the phrase ‘Special Category States’ with ‘Indian Himalayan Region States’ from the proposed joint Memorandum to the 15th Finance Commission with appeals for consideration of the problems and issues faced by IHR States on the basis of being hilly and mountainous States and our contributions to the country’s ecology, environment and forest cover and for being international sentinel border States toward the security concerns of the Nation. (Page News Service)