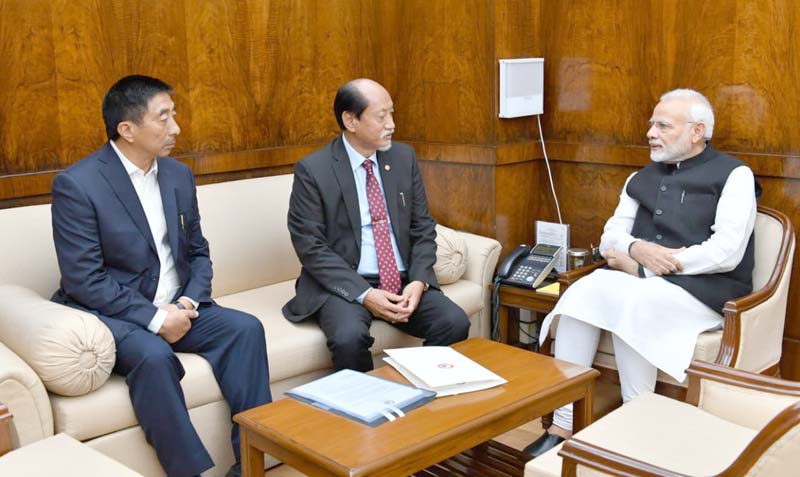 Dimapur, December 14: Chief Minister Neiphiu Rio along with MP (Lok Sabha) Tokheho Yepthomi called on Prime Minister Narendra Modi on Thursday at Parliament House, New Delhi.
The Chief Minister impressed upon the Prime Minister the desire of the Nagas for an early settlement to the vexed, decades old Naga political issue.
Rio briefed the Prime Minister that the Nagaland Gaon Bura Federation (NGBF) carried out a peaceful march on December 12 across all districts of the State and also submitted a memorandum to the Prime Minister through the Governor of Nagaland and all the DCs for an early and inclusive solution. He expressed appreciation to the Prime Minister for the NDA Government’s commitment towards resolving the long-pending Naga political issue for which the GoI had been negotiating with the NNPGs.
Rio also discussed the Ciethu Airport at Kohima and apprised the Prime Minister that it was a commitment of the then Prime Minister Late Atal Bihari Vajpayee that all State capitals should have an airport.
The CM compared the project to the Silchar-Jiribam-Tupul-Imphal railway project and stated that the estimated cost of Ciethu Airport project was much less compared to the railway project. He expressed anguish over the delay in the sanctioning of the airport and hoped that the Prime Minister will personally intervene in the matter.
The Chief Minister further requested the Prime Minister to release the pending balance under erstwhile SPA due to the State as some of those projects have already been completed while the others are on the verge of completion. He apprised Modi that the recommendation for release of SPA was duly forwarded by the Ministry of Finance wherein some queries were made to NITI Aayog for clarification which NITI Aayog duly replied vide their letter F.No.M-13048/19(NL)/2015-S-NE dated 8.10.2018. He urged the Prime Minister to recommend release of the approved amount so that the various ongoing developmental works may be completed at the earliest since it is long overdue.
The Prime Minister, after a patient hearing, thanked the Chief Minister and the MP (Lok Sabha) for apprising him and assured that he will take up the matters with the ministries concerned. (Page News Service)