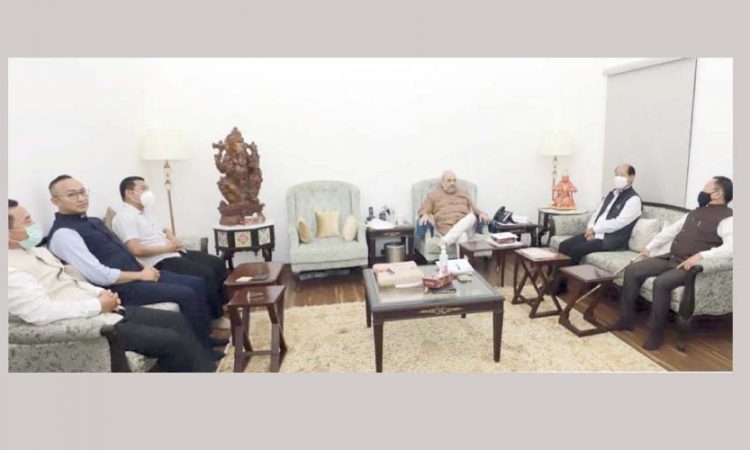 DIMAPUR, MARCH 18: An all-party delegation from Nagaland led by Chief Minister Neiphiu Rio on Thursday urged Union Home Minister Amit Shah to expedite the Indo-Naga peace talks and “bring about an early and honourable solution to the Naga political issue”.

In a tweet, Rio said that he was accompanied by NPF leader TR Zeliang, BJP legislators Mmhonlumo Kikon and H Khehovi Yepthomi, and Independent legislator Tongpang Ozukum
On Wednesday, sources had told Nagaland Page that the delegation was expected to convey the resolution of the Nagaland Legislative Assembly (NLA) on Naga peace talks, and urge Shah to expedite the negotiations.
The opposition Naga People’s Front (NPF) has been insisting that a Joint Parliamentary Committee be formed and proceed to New Delhi to meet the Prime Minister Narendra Modi and other central leaders.
While the NSCN (IM) and the Centre are trying to break the impasse, the president of Nagaland BJP, Temjen Imna Along had told the recently-concluded NLA session about the Centre rejecting demand for a separate Naga flag and a constitution.
Naga lawmakers have been harping on “honourable and acceptable” solution to the decades-old Naga political problem. But none of them have spelt or defined what constitutes an “honourable and acceptable solution”.

The NSCN (IM), in its latest public statement, had made it clear that any solution should be within the parameter of the Framework Agreement of August 3, 2015, signed in the presence of the PM Modi and the them Home Minister, Rajnath Singh.
After much fanfare, now differences in the interpretation of the Framework Agreement among the negotiators representing New Delhi and NSCN (IM) have been stalling the progress towards a final solution. (Page News Service)