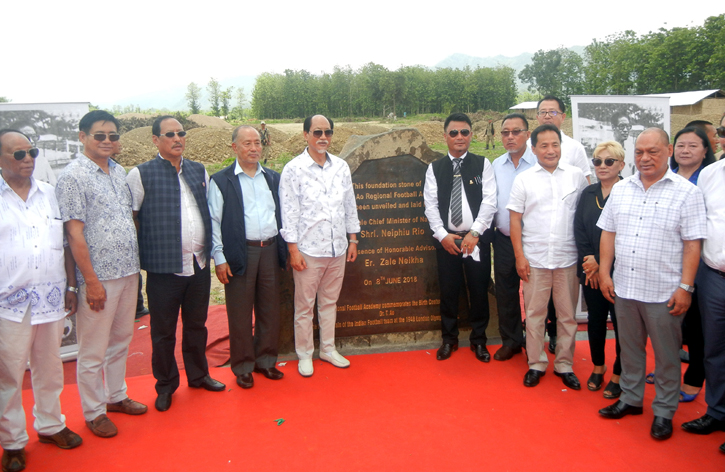 Dimapur, June 9: It is a befitting honour to the football legend of Nagaland, Dr T Ao in his 100th Birth Centenary year, when a regional football academy has been announced in his name. Dr T Ao Regional Football Academy is going to come up at Seithekema ‘C’, Dimapur with the assistance of North Eastern Council and Tata Trust, enabling budding talents from the state of Nagaland and the Northeast to get trained under experienced hands.
Laying the foundation stone for the Academy, Nagaland Chief Minister, Neiphiu Rio today termed it as a historic occasion.
“Though late, we are trying to leave an impression to our people and youths that Dr T Ao being a good student, however could excel in the field of sports, particularly football,” Rio said, adding, “”Born among the Nagas, he brought laurels not only to his family but to the whole Nagas, so his legacy should live on.”
He hoped that the Academy would inspire young talented sportsperson, particularly in the field of football.
The chief minister, who himself is an avid sports lover, pointed out that involvement in sports teaches us to be disciplined, creates a sense of fair play and team work, and keeps us healthy both physically and mentally and therefore encouraged the younger generation to give importance in the field of sports.
Rio felt that youth activities particularly sports has stopped for sometimes in Nagaland but assured for its revival.
The chief minister disclosed that he had taken up the project in 2011 and appealed to the NEC and Ministry of Sports. Even though they agreed, the project could not be taken up, he added.
He further disclosed that on March 22, 2018, the NEC granted Rs 13 crore to start the academy and later the Tata Trust assured to participate through CSR and provided Rs 15 crore to set up gymnasium, hostel facilities, turf and lights to play at night.
Rio informed that when the survey was made, it was found that the land was already purchased but it was small and they the government requested the IT Department, which had 20 acres of land. The said land was easily acquired in exchange of another land at Niuland for the IT Department.
The chief minister said that the government has requested the Union Ministry of Youth Resources and Sports to “rescue us” as the whole project would cost around Rs 100 crores.
Rio was optimistic that the coming up of the Academy would inspire the young talented sportspersons particularly football.
He said that the state government is going to revive all the sporting activities including games awards and Nagaland Premier League.
He assured the Nagaland Football Association that budget would be placed every year and also mooted the idea to bring a system where all the districts would have football clubs. Further, Rio said that the government would discuss and revive policies for sports personnel/lovers and conduct tournaments regularly in order to give opportunity to the youth. Stating that promotion of sports needs huge financial support,
Advisor, Youth Resources & Sports, Nagaland, Er. Zale Neikha informed that PDA Government has come out with a policy for giving appointment to sportspersons in different departments under sports quota.
President Nagaland Football Association, Atuo Mezhur, termed the occasion as a ‘red letter’ day for football in Nagaland. A dream dreamt many years has come to be a reality under the leadership of Neiphiu Rio, the NFA President said.
He opined that sports was not just for recreation but an industry because sportspersons can earn their livelihood. He thanked the present government for reviving the Dr. T. Ao Inter District tournament and also requested the Chief Minister for funding and reviving the Nagaland Premier League.
Secretary General, Nagaland Olympic Association, Meren Paul narrated the laudable achievements and the hard work and dedication of the football legend. (Page News Service)