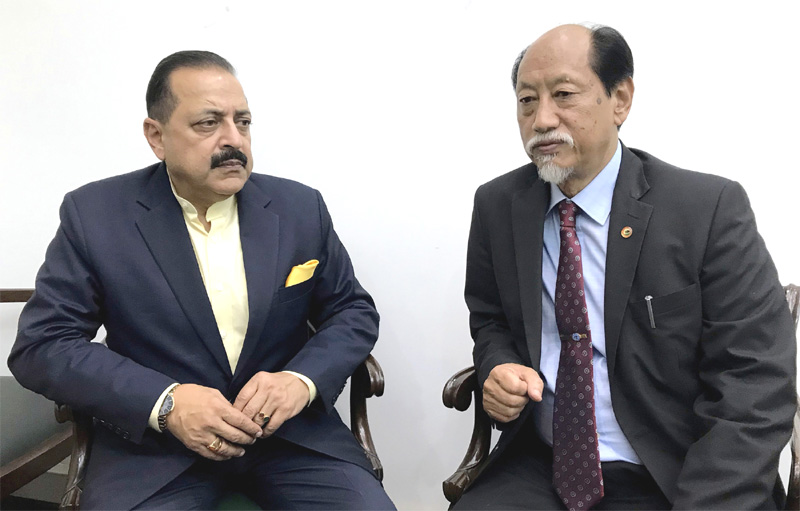 Dimapur, December 13: Nagaland Chief Minister, Nephiu Rio on Thursday called on Union Minister of State (Independent Charge) Development of North Eastern Region (DoNER), MoS PMO, Personnel, Public Grievances & Pensions, Atomic Energy and Space, Dr Jitendra Singh in New Delhi and held a detailed discussion on a wide range of subjects including the proposed airport in the capital city Kohima, centrally funded road projects and the railway line under construction.
Dr Jitendra Singh informed Rio that he had discussed the issue of setting up airport at Kohima with the Airport Authorities. Earlier, there were some issues regarding the land acquisition, but now it has been informed that the land has been acquired. He said the Secretary, North Eastern Council (NEC) has also written to the Regional Executive Director (Aviation), North Eastern region on the same.
Dr Jitendra Singh also informed the Chief Minister about two road projects currently in pipeline with funding from Ministry of Development of Northeastern Region (DoNER). These include up-gradation of A T Road from Tsurangra to Impur Junction and the second one from Tening town in Nagaland connecting to Lekie Road in Assam over a length of 51 kms. He said while the DPR for one of the road projects has been received, the State Government may cooperate in expediting the finalization of the DPR for other project.
Jitendra Singh also shared with Rio the proposal for a new Sericulture Project for Nagaland. There were some technical incompletions in the DPR which need to be corrected at the earliest, he said.
The Chief Minister also discussed with the DoNER Minister the Jiribam-Imphal Railway line which includes the tallest railway bridge. The CM offered some suggestions regarding the further extension of railway link to include certain destination points within Nagaland. (Page News Service)