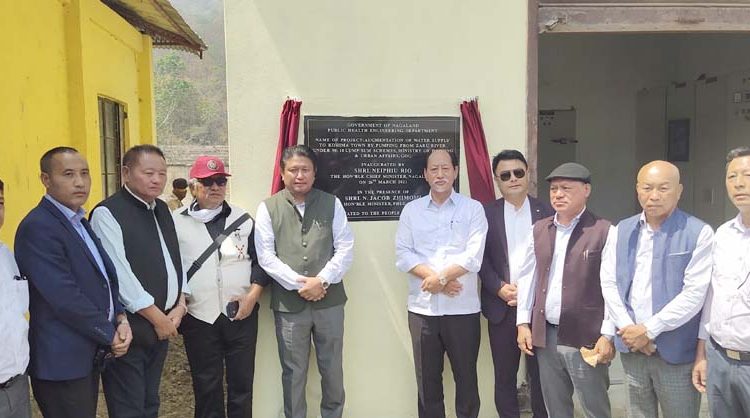 Chief Minister Rio, legislators, bureaucrats and others during the commissioning of augmentation of water supply to Kohima town on March 26, 2021.

Against the total requirement of 11 million litres per day for Kohima town, only 1.5 million litres per day is received at present and the commissioning of Zaru project will solve the water scarcity problem in the capital city to a great extend as it would provide 3.8 lakh litres of water per day.
The project started in 2012, involving an estimated cost of Rs. 46.73 crore is funded by the Ministry of Housing and Urban Affairs (MoHUA) with a funding pattern of 90:10 (Lump sum).
Presently, the scheme will cover PR Hill, Chandmari, PWD and part of the main town, consisting of about 3000 consumers.
It will cover more wards as the distribution system is improved and expanded, said Chief Engineer and Head of Department, Public Health Engineering (PHE) Nagaland Repangyangba Longkumer while presenting the technical report of the project.
The project is power supply dependent, for which feasibility of power back-up generators is being explored, as this scheme for augmentation of water supply to the State capital Kohima involves pumping of water from Zaru river stream to a reservoir at Kigwema village through two stages of pumping, he said.
The design capacity of the project is 3.80 million litres daily, Longkumer informed.
Speaking at the formal commissioning programme, Chief Minister Neiphiu Rio stressed on the need for very careful maintenance of the source with proper cooperation and coordination between the two villages and the Department of PHE as well as the Power Department.
Kohima is reeling under acute shortage of drinking water with continuous increase in the urban population with even the spring waters drying up during the lean period which is leading to people facing hardship of buying drinking water from private carriers and also packaged water, he said.
Such water is not treated and can cause waterborne diseases, he feared.
Kohima water supply is a serious problem as people have to face acute shortage during the lean period with a requirement of 1.4 lakh litres per day.
In this, Rio expressed fear that with unavailability of potable people would slowly move away from the State’s capital town and it would be difficult to uphold the capital status.
However, Rio appreciated the Zaru water source owners of Southern Angami Public Organization (SAPO) and specially Mima and Kezoma villagers for their willingness to give water for the dwellers of Kohima town.
Maintaining that Dzukou water project would be the best source to provide drinking water for the State capital, he said the project has been stretching for almost 15 years now and finally the land issue has been resolved while the department is preparing DPR and the Government is looking for loan from agencies.
In Nagaland, the land belongs to the people and so people have to cooperate with the government for development activities, said Rio while citing the Mizoram system of support and cooperation between the government and the people for overall development.
Rio said despite all difficulties the department is working hard for the public to provide potable water in which the public should also extend full cooperation by paying back for the facilities they receive. “Nagas have to change their habits to pay for the services they enjoy,” said Rio, while highlighting that the state government has been facing huge losses in the power sector as consumers, including government servants don’t pay the power bills.
Rio once again stressed on the need to privatize water and power sectors in the urban areas of the state so that the private parties can introduce a proper prepaid metering system through which the government would also be able to generate some revenue.

Also speaking on the occasion, Nagaland’s PHED minister Jacob Zhimomi described the commissioning of the augmentation of water supply scheme as a huge relief for the people of Kohima town. He assured that proper maintenance and operation will be done.
Chairman of Mima Village Council Neichiizo Keyie and Chairman of Kezoma Village Council Puhovi Tase delivering short speeches assured to extend all possible support to the department and the state government to the upkeep of the source for supply of water to the people of the capital town.
Secretary PHED Nagaland Kesonyü Yhome delivered the vote of thanks. (Page News Service)