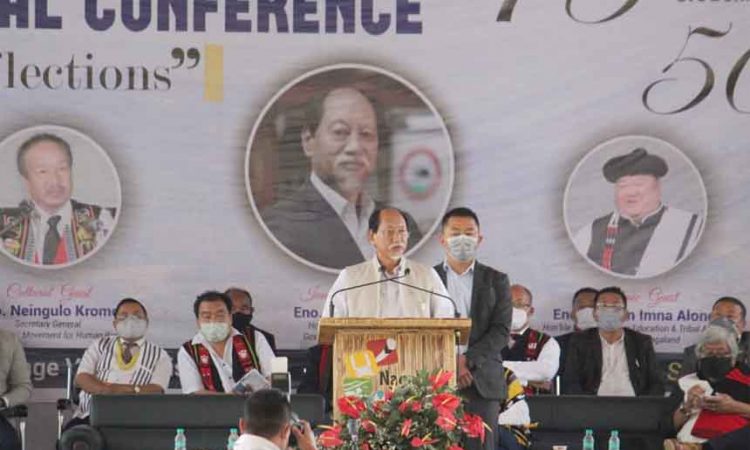 Kohima, April 24: Nagaland Chief Minister Neiphiu Rio today sought the collective effort of the Naga people to give the “last push” to achieve an honourable and acceptable solution to the vexed Naga political issue between the Government of India (GoI) and Naga negotiators.

Addressing the inaugural session of the 29th biennial general conference of the Angami Students’ Union (ASU) at Naga Heritage Village Kisama here, Rio said the Naga political issue belongs to the people and therefore we need to do what can be done as per the prevailing situation to arrive at an agreement. He said leaders of the present generation must seriously deliberate on the issue.
With the Naga history being recognized as “unique” and the Naga issue recognized as a “political issue”, he urged Nagas to think and live accordingly.
He assured that the State Government is working along with the opposition party to expedite the Naga peace process.
On the contentious issue of the Naga flag and Constitution, Rio recalled his meeting with Union Home Minister Amit Shah during his recent visit to Delhi and informed that Shah has said there cannot be a separate flag and constitution for the Nagas.
However, he said a flag that symbolizes the uniqueness of the Nagas can be used under the Indian Union during community functions, but not at Government establishments or meetings.
Citing a conversation with the Home minister, he said that if this condition can be agreed upon, the HM hinted his consent to personally hoist the flag on the Naga day. He added that after such an agreement, an expert committee will be formed to frame the constitution which can be included under the Indian Constitution like Art 371(A). He added that such an agreement will be for the general welfare of the Nagas.
Also dwelling on the Government’s initiative for Register of Indigenous Inhabitants of Nagaland (RIIN), Rio recalled that the implementation of Inner Line Permit (ILP) in Dimapur was done following the report of a committee led by Abhishek Singh. He said that the question of who will come under the purview of ILP was then raised, which also led to the need to identify who is an indigenous inhabitant of the State.
He said that the Government is conducting several consultative meetings with tribal leaders on the issue of RIIN as it needs to be thoroughly deliberated.
He highlighted about the important role of the village councils who will be responsible to certify who is indigenous and native. However, the document certified by the VC will later be verified by the respective district administration.
He also highlighted about the role of the village council and tribal councils who will ensure that the customary laws (as empowered under clause 7 and 8 of the 16 point agreement) are ensured.
If powers are misused by the village council, he said that leaders involved in forging fake indigenous inhabitant certificates may even be excommunicated.
Exhorting students from the Angami Naga community to become valuable assets to the society rather than becoming a liability, he encouraged them to have a positive attitude in life.
Also taking the opportunity, the CM appealed all those who are eligible to receive the COVID-19 vaccine. Expressing discontentment that only around 15% of the people in the state have been vaccinated so far, he urged the students to also create awareness about the vaccination.
ASU president Vizokho Zashümo in his presidential address, urged the student community to reflect upon the natural Angami Naga ways of life and norms.
Extending greetings, the first vice president of the Kohima Sub-Division Students’ Conference, Rev Beilie-ü Shüya encouraged the Angami students to preserve the tradition of wearing traditional attires.
Angami Public Organization (APO) president Kepelhousie Terhuja, while extending greetings, hoped that the Angami tribe will continue to maintain cordial relationship with the other Naga tribes.