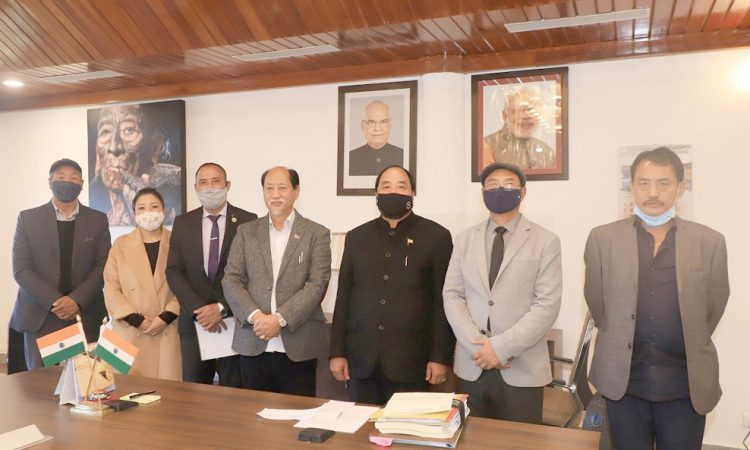 Medo has been assigned with Technical Education and Elections affecting a minor shuffle in the Government.
Rio handed over the appointment letter to Yhokha at the CM’s residential office here in the presence of Deputy Chief Minister Y Patton, Cabinet Ministers, NDPP president Chingwang Konyak, BJP president Temjen Imna Along and his family members.
This has affected minor reshuffle in the Rio Government as the Technical Education Department was held by BJP president and Minister for Higher Education and Tribal Affairs, Along. Elections was with CM Rio.
Meanwhile, Yhokha expressed happiness and conveyed gratitude to Chief Minister Rio for appointing him as the Advisor. He also acknowledged the NDPP leaders, led by the Party president for the support.
“I will be committed and will try to emulate and perform my responsibilities up to the expectation of the general public and leaders for the upliftment of the Departments,” he said.
Yhokha won the bye-election to 14-Southern Angami-I seat, the poll for which was held on November 3 and result declared on November 10.
Yhokha polled 4,773 votes defeating his nearest rival Independent candidate Seyievilie Peter Zashumo by 598 votes, who got 4175 votes.
On the other hand, newly elected Independent MLA from 60-Pungro-Kiphire seat of Kiphire district, T Yangseo Sangtam has handed over a ‘letter of support’ to the ruling People’s Democratic Alliance (PDA) but has not been assigned with any portfolio.
“I handed over the support letter to Chief Minister Neiphiu Rio while making a courtesy call on him after being sworn in as MLA on November 18,” he said.
Reaffirming his support to PDA, he said “I will continue to remain committed”. Asked on Nagaland BJP unit, an ally of NDPP-led Government, is trying to pull him over, Sangtam said he would not be joining any particular party.
Sangtam won the seat by a margin of 1,527 votes. He got 8,747 votes comfortably defeating his nearest rival S Kiusumew Yimchunger, another Independent candidate, who polled 7,220 votes.
On being contacted, Minister for Planning and Coordination, Land Revenue and Political Affairs, Neiba Kronu said that only one change has been made today while more discussions have not been held on any further reshuffle.