HomeTop StoriesRIIN will not hurt the interest of any citizen: CM
Top Stories
2 years agoAugust 15, 2019No tags 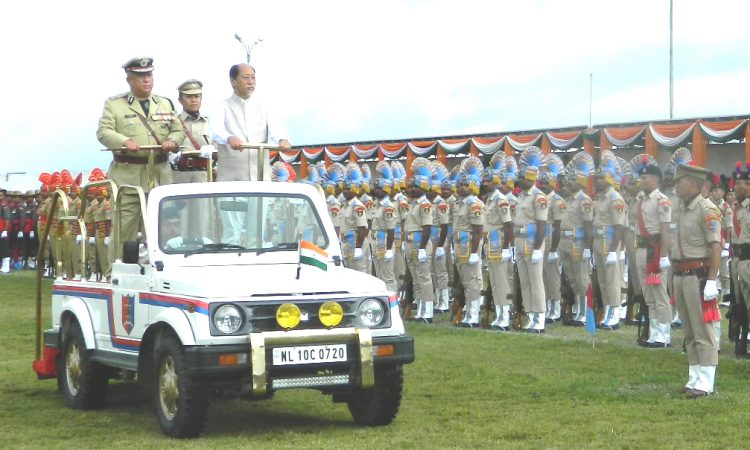 Kohima, August 15: Nagaland today joined the nation in peaceful celebration of 73rd Independence Day displaying the rich and colourful tradition of the Nagas and the assertion of the Government that RIIN will not discriminate or hurt the interest of any citizen.
“The Register of Indigenous Inhabitants of Nagaland (RIIN) exercise is to properly identify the indigenous people of Nagaland as well as those domiciled and permanently settled in the State which will also help in the effective implementation of Inner Line Permit (ILP),” said Chief Minister, Neiphiu Rio while addressing the 73rd Independence Day celebration at the Secretariat Plaza here.
“My government has always kept the welfare of our people at the core of our agenda, and an important part of it also means creating systems and devising mechanisms which protect the people and allow them to safeguard their rights and entitlements,” he said.
The CM said the Government had examined with utmost seriousness the evolving demands for extending the ILP regulations to the entire state by covering Dimapur. He said the Government has considered the concerns expressed by various well meaning civil society organizations of the precarious situation existing in Dimapur because of the large influx of illegal migrants, as well as the visible deterioration of Dimapur owing to inroads made by anti social elements of various shades over the years.
Stating that the Government has therefore decided to extend the ILP regime to Dimapur, he said the work towards that has started and is in the process of devising the modalities and framing the necessary rules and regulations. He said that in the process, the Government felt that there is a pressing need for having proper record of our own people as well as the genuine citizens who have been staying here for decades, and who have made Nagaland their home.
Such a list is also required for putting an end to the menace of issuance of illegal or fake indigenous inhabitant certificate to undeserving, he said.
In this, the CM said that the Government decided to work for creation of RIIN, which was announced on June 29 last and has attracted many responses from various sections, tribal bodies, civil society organizations as well as individuals.
The Government has constituted a three member commission which is mandated to look into all the issues raised in connection with RIIN, study them minutely, do further consultations and then come up with definitive answers and recommendations, he said.
The commission has started working, and soon, we will have a report which will lay out the road map for the RIIN exercise, he said while assuring that this will be tabled in the Assembly for deliberations, and only then the modalities will be finalized which should be acceptable to the people.
Also stating that customs and traditions of the Naga people play is in danger of being forgotten, he said the Government has set up a committee to compile all the customary practices and usage.
He also echoed the aspirations of the people to expedite the political dialogue for an early, honourable and acceptable solution of the Naga political talks. “Peace has eluded us for too long and now is the opportune time to come together and expedite the political dialogue for an early, honourable and acceptable solution,” he said.
Rio also conveyed appreciation to the Government of India for reiterating the uniqueness of the Naga history and the reassurance that Article 371A is a solemn and sacred commitment to the people of Nagaland.
The CM also reiterated the longstanding desire of the Naga people for the integration of all the contiguous Naga inhabited areas.
“We have always supported this just and democratic right of the Naga people,” he said while fervently appealing to the neighbouring states to recognize the history, the yearning and the democratic rights of the Nagas so that “we can live together under a spirit of peaceful coexistence in the truest traditions of harmony and friendship”.
In the developmental sector, Rio said the Government has made achievements in every field that Nagas can be rightly proud of. There has been progress and good work done in every sphere which has improved the quality of life the Naga people, he said.
Nonetheless, the CM said “we should always keep in sight what the more advanced stated in the country have achieved and keep striving to reach up to their level”.
Given the capacity and will of our people, the natural resources, the forest and bio-diversity that Nagas are endowed with, and the geographical advantage that the state have, Rio expressed confidence that very soon Nagaland will figure in the league of the most developed states of the nation.
The Chief Minister also handed over different awards to police personnel, government officials and individual for meritorious and distinguished services. (Page News Service)

Other highlights of CM speech:
Police Department
Construction of multi-storied barrack for 300 constable trainees at PTS Chumukedima.
New office of IGP (Int) in Kohima
Upgradation of Police communication system of Dimapur district from analogue to digital system.
Cyber crime prevention against women and children laboratory set-up at PTS Chumukedima.
Special Task Force raised on March 8, 2019 comrpising of six platoons for containing extortion, illegal activities and for operation exigencies of the State.
Village Guards & Prisons
Efforts on to modernize and upgradation
Digitization of all Jails in collaboration with State Legal Services Authority and National Informatics Centre through Ministry of Home Affairs for E-prisons system.
Lokayukta
Established on February 22, 2019 and erstwhile Vigilance Commission merged with it.
Education
Working to transform education system to meet the aspirations of the new generation.
Students of Govetnment schools in Kiphire, aspirational district provided with digital tablets to enhance their learning.
Administrative and Academic building of newly constructed New Model Degree College at Wakching, Mon inaugurated by Prime Minister on February 3 through digital launching.
Atmospheric Science Research Centre established at Kohiam Science College, Jotsoma.
Special cell for all student scholarships to be functional soon.
Common Scholarship Portal launched; It envisages to streamline the existing systems wherein various departments were providing scholarships individually.
Health & Family Welfare
Under Ayushman Bharat Scheme, 55 Public Hospitals and 5 private hospitals have been empanelled while 76,663 e-cards issued and benefits worth over Rs 1 crore availed by beneficiaries till June 2019.
Upgradation of State Public Health Laboratory for sophisticated technologies has been accomplished.
Agri & Allied
Main focus has been on organic farming for which State will soon be adopting Organic Policy.
Air Conditioned Market at Agri Expo site, Dimapur is being undertaken.
Department of Seiculture is etting up three common facility centres at Phek, Mokokchung and Wokha to promote Eri Culture.
For Aspirational district of Kiphire – Eri & Oak Tasar Silk Development Project is being implemented with funding from Ministry of Textiles.
Road
48 projects under Special Road Development Programme completed and five works with total length of 64 km are in progress under NABARD.
Power
100% rural household electrification under Saubhagya Flagship Programme of GoI achieved.
IT enabled covering Metering, Billing and Colelction has been successfully completed in 9 towns.
Implementation of Integrated Power Development Scheme in 12 towns covering 11 district headquarters and Chumukedima town.
Under Green Village Initiative, a flagship programme of State Gvoernment, the Department has taken ip awareness programme in 85 villages to showcase and educate the people on Energy Conservation and its efficient use, besides free distribution of Energy Efficient LED bulbs, FC Tubes and Streetlights.
PHE
Augmentation of Water supply to Kohiam town completed and will be commissioned shortly.
Projects for providing Water Supply to Akuk Old village by pumping in Wokha district and augmentation fo water supply scheme through stream water sources in Japukong Range, Mokokchung district have been completed and will be commissioned shortly.
IT
Software Technology Park of India at Kohima ready for commissioning.
MoU signed with e-Governance Academy of Estonia for setting up e-Governance Academy of Nagaland.
Plastic Free
The State government while focusing on sustainable development has announced a project on ‘Plastic Free Nagaland’ wherein entrepreneurs will be provided funds under Chief Minister’s Corpus Fund to produce alternative products like bamboo, jute and paper products to replace plastics. Funds have been allocated to all the 11 districts to initiate this programme.
LADP
Funds under Local Area Development Programme (LADP) have been enhanced to Rs 90 crores @ Rs 1.50 crore per Assembly Constituency with a view to take up one iconic project in each district headquarters.
Tourism
Development of Integrated Theme based tribal Circuits under Swadesh Darshan Scheme in a pahse wise manner and presently it is going on in full swing at Peren-Kohima-Wokha while the Phase-II coverage will be at Mokokchung-Tuensang-Mon,
Adventure tourism, beginning with hiking, will be promoted in a bigger way.
Tours to Holy Land and pilgrimages will be organized from current year where selection of the tourists will be made in consultation with various churches.