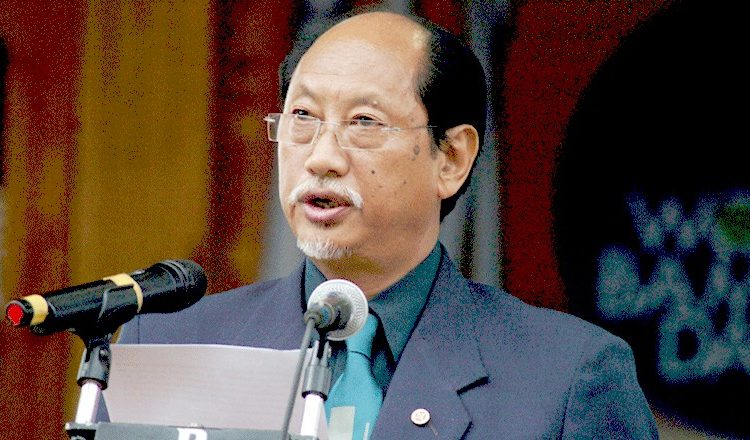 KOHIMA, FEBRUARY 9: The ensuing NLA Budget Session, scheduled to begin from February 12, will feature discussions on Naga political issue, SARFAESI Act and revenue generation in Power sector while RIIN issue is unlikely surface despite pressure from various civil society organisations in the State.

Interacting with reporters in Kohima today, Chief Minister Neiphiu Rio said during the discussion on matters of urgent public importance, the members will deliberate and pass resolutions on the vexed Naga political issue and Securitisation and Reconstruction of Financial Assets and Enforcement of Securities Interest Act 2002 (SARFAESI) Act of 2002 in the context of the State.
In response to the appeals of various civil society organisations to make the proposed Register of Indigenous Inhabitants of Nagaland (RIIN) into Act during this Assembly Session, Rio said the government is working on the issue and should be allowed to function without any deadlines “as such matters have to be done properly”.
No one can give deadlines of this or that session and time limit should not be set; they should know the government formalities for things to be done properly, he said.
The Chief Minister informed that the Cabinet has already approved the report submitted by the committee on RIIN but the implementation is taking time. The Cabinet is taking up different parts, which is taking time, he added.
“We have segregated the indigenous Naga citizens, and the hill tribals of Northeast Region because the Bengal Eastern Frontier Regulation Act of 1873 is not only for Nagas but for the whole of eastern hill tribes, and the 1979 notification of the State Government which declared Dimapur sub-division then under Kohima district as a tribal belt,” he said.
All these aspects are being studied to give them proper status, he affirmed.
The Chief Minister stated that the same notification covers any Naga, Kukis, Kacharis, Garos and Tikhirs – five tribals inhabiting Dimapur-and cannot be excluded from the rest of the State.
He said that some non-Nagas have settled in the Naga Hills area pre India’s independence, while those people who have come after 1963 will also get a status ‘as this State is not only for one people but is under Indian Union’.
“We have to give protection to all and everybody should get their rightful rights,” Rio added.
‘Very, very important sector’
The chief minister informed that the government will also initiate discussion to improve revenue generation in the Power sector as it has become ‘very, very important’ for the State.
He said that the Business Advisory Committee of the NLA has already decided these activities, besides others, for the ensuing session.
The nine-day long session will commence with Governor R N Ravi’s address followed by obituary reference and motion of thanks to the Governor’s address on the first day.
As per the provisional programme of business, the question hours will be held from February 15. The Budget for the year 2021-2022 will be presented on February 18, which would be taken up for consideration and passage on the last day of the session on February 20.
Governor’s letter
On the recent letter of Governor RN Ravi asking the Chief Secretary to take action against government employees voicing support to demands for sovereign Nagaland on various social media platforms, Rio maintained that if “any government servant or public write things which are against the State, the law will take its own course”.
‘Welcomes Niki’
On the NSCN (K) group led by Nikki Sumi deciding to join the Indo-Naga negotiations for an early solution, Rio said that the State Government welcomes him and that ‘speaks volume’.
Asked whether the Joint Legislators’ Forum of the NLA would meet with Nikki, the Chief Minister said, “If necessary, we will personally meet him and have meetings.”

Union budget
Rio termed the Union Budget 2021-22 as a people-friendly budget. “This is a difficult time because of COVID-19 and the world is suffering while the economy around the world is bad…that’s why we cannot say it is the best budget but it is a people-friendly budget,” he said.
The Chief Minister was also hopeful that though the farmers are protesting against the three farms laws amidst the COVID-19 pandemic, the country would overcome all such problems through proper dialogue. (Page News Service)