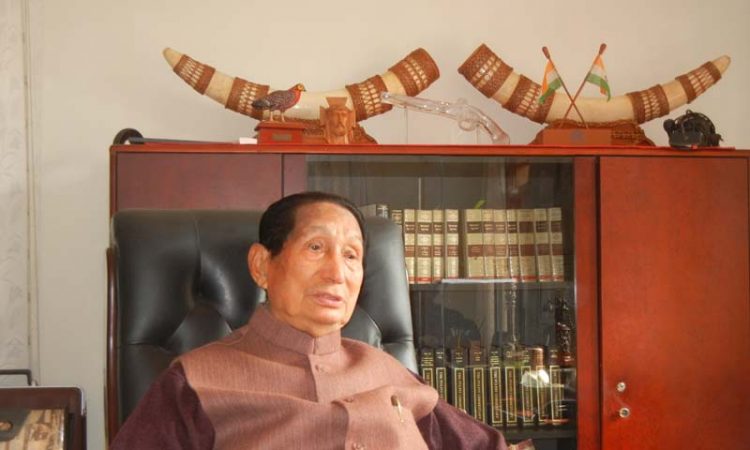 Dimapur, January 30: Former Chief Minister of Nagaland, Dr SC Jamir has appealed to the Government of India not to delay any further in bringing about an amicable solution to the Indo-Naga political problem that is honourable and acceptable to all the negotiating parties.
“I would like to express it very strongly that this is the time that settlement must be made by the Government of India. And it requires the political will to do so,” he said.
Talking exclusively to Nagaland Page, the former Governor of Maharashtra, Goa & Odisha disclosed that he had been telling leaders of India that if they want to resolve the Naga issue, it has to be now.

The reason why it is the opportune time to settle the Naga political issue, he said, is because the “political groups of the undergrounds” have become more realistic.
“In the past they (Naga groups) were talking only one agenda – that is sovereignty. But with the signing of Peace Accord on 3rd Aug 2015 in the presence of the Prime Minister and the Home Minister, we can safely say that the issue of sovereignty is no longer there,” he said.
Once sovereignty is removed what is the problem with the Government to India to resolve the Naga political issue within the parameter of Constitution of India, he asked.
“So when underground people, who see the realities of the politics of the country and the world, I think this opportunity should not be allowed fizzled out by the Government of India. I would like to express it very strongly that this is the time that settlement must be made by the Government of India,” he said.
Jamir also wanted everyone to appreciate the sagacity of the “underground people” in realizing that something should be done that is honourable for both the Government of India and the Naga people. “I think the process which is on for the last few years is in the right direction. So the Government of India should also recognize the genuineness of the feeling of those underground people and their endeavor to come to a logical conclusion of the Naga political talks.”
Stating that taking all the Naga groups for talks was the right move, he said now there will be only one settlement. “They were negotiating with NSCN (IM) but now they have included 6 more groups. They are aiming at single political settlement for Nagaland and that will be a blessing for all,” he said.
On the role of Government of Nagaland, Jamir said it is the right time for the State Government to actively involve in certain issues relating to the Naga political issue.
According to Jamir, if final settlement is made, the decommissioning of weapons and rehabilitation of underground people will come up. “We have to work in detail to suitably accommodate those underground in some kind of scheme and the State has to play a major role. Therefore they (State Govt) should start working on what kind of rehabilitation scheme will be more appropriate for the underground. Instead of just being a facilitator, they should be actively involved in concretizing the rehabilitation scheme,” he opined.
Secondly the Government of Nagaland should directly involve in convincing the Government of India to take the Indo-Naga political settlement very seriously.
Thirdly, Jamir said, the State Government should mobilize public opinion in the State that “since sovereignty is not feasible now, the people should appreciate the political realities of today in the country and the world and therefore whatever is being done, initiated by the underground” is in the right direction.
“I think we should also recognize their efforts….instead of blaming I think we should also realize the difficulties and reality of the situation,” he added.
The former Chief Minister, however, added, “These three roles the State Government should be playing but they are not doing.” (Page News Service)