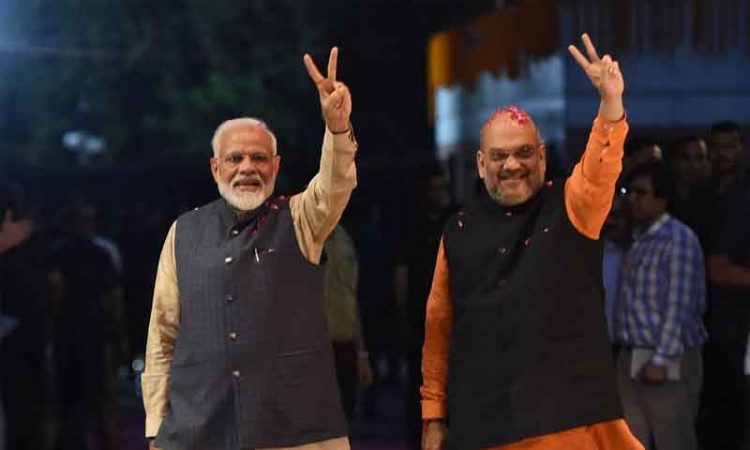 New Delhi, May 23: Riding high on Prime Minister Narendra Modi’s popularity and on the nationalism wave, the Bharatiya Janata Party (BJP) Thursday swept the 2019 Lok Sabha elections with a bigger mandate than 2014. While the BJP is on course to win 303 seats, the NDA alliance looks certain to cross 350 in the 542 seats that went to polls.
There are many firsts in BJP’s remarkable feat. Firstly, Narendra Modi will become the first non-Congress Prime Minister to return to power after a full five-year term. Secondly, the BJP will become the first party since Indira Gandhi’s Congress to return with a majority of its own. The victory is considered as a staggering achievement given the party had already set an almost impossibly high bar for itself in 2014.
On the contrary, the Congress’ strategy to seize the narrative from the BJP came a cropper as it could only win 51 seats, a slight improvement from its 2014 tally of 44 seats. Although its party chief Rahul Gandhi won the Wayanad seat by a huge margin, he lost his Amethi seat to BJP candidate and Union Minister Smriti Irani in the biggest upset of the election. The Congress was also given a reality check in Hindi heartland states of Chhattisgarh, Rajasthan and Madhya Pradesh where the party formed the government six months ago.
In his first remarks after elections, PM Modi expressed his gratitude to the people for giving his party a huge mandate and said it would, in turn, strengthen the BJP to work even harder to fulfil people’s aspiration. “We will build a strong and inclusive India,” he tweeted.
Meanwhile, the Congress chief conceded his defeat and congratulated PM Modi and the BJP for their landslide victory and said his party will continue to fight the ideological battle with the saffron party.
Buoyed over the results, the benchmark BSE Sensex touched 40,000 for the first time and NSE Nifty breached the 12,000 level. The rupee appreciated 14 paise to 69.51 against the US dollar trade.
In the politically critical state of Uttar Pradesh, which sends 80 MPs to the Lok Sabha, the BJP managed to stave off a formidable caste arithmetic of SP-BSP alliance by winning two seats and leading in 59 other seats. Although the BJP had won 71 seats in the previous elections, the performance is way better than what many exit polls had predicted. While the SP is ahead in seven, BSP gained more out of the alliance as it is leading in 11 seats. For Congress, the results came as a rude shock considering AICC General Secretary Priyanka Gandhi campaigned extensively in the state.
In a major embarrassment, the Congress failed to cash in on the advantage gained due to its victories in the crucial Madhya Pradesh, Rajasthan and Chhattisgarh assembly elections held last year. While the Modi wave helped the BJP cruise through the Hindi heartland and Gujarat, the saffron party also made significant gains in West Bengal, Odisha, Maharashtra and Karnataka. Similar was the story in Bihar, Haryana, Himachal Pradesh, Uttarakhand, Maharashtra, Delhi and notably Karnataka, where it is expected to win 25 out of 28 seats.
The only silver lining in the bleak scenario for Congress is that it fared better in Punjab and Kerala. Although it drew a blank in Andhra Pradesh, the BJP was ahead in four seats, the same as the Telangana Rashtra Samiti, in Telangana. (Courtesy: IE)