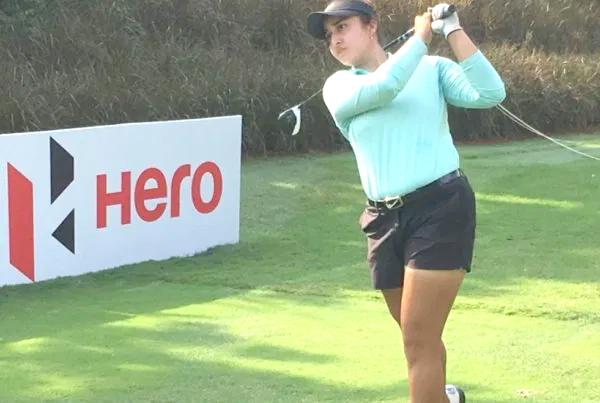 Bengaluru, January 15: Ridhima Dilawari carded a third straight under par round to complete a start-to-finish win in the first leg of the Hero Women’s Pro Golf Tour 2021 here on Friday.

Ridhima (71-67) brought home a card of one-under 71 on the final day to finish the week with a total of seven-under 209, giving her a comfortable five-short win over Pranavi Urs (70).
Vani Kapoor had better luck with the birdies on the final day and returned a card of two-under 70 for an even par total of 216 and finished third.
Underlining the growing strength of promising women amateurs on the Indian golfing scene, Disha Kavery also shot 70 to finish fourth, while Ananya Datar (70) was fifth.
Ridhima, who began the day with a six-shot lead, once again had a rocky start with a double bogey on the Par-5 third hole.
“(There was) no tension. I was playing good, just had a bit of a brain freeze on one shot,” she said.
Shrugging aside the double, Ridhima birdied the fourth and added another on eighth. A bogey on ninth saw her take the turn at one-over, but she was still way ahead of playing partner Pranavi (70), who had an eagle on Par-5 third, and turned in even par 36. Pranavi had bogeyed third and fourth.
On the back nine, Ridhima played steady and made no errors and sealed her win with birdies on 16th and 18th for a 71.
Pranavi bogeyed 10th but birdied the 12th, 16th and 17th to keep Vani Kapoor at bay. Vani had four birdies against two bogeys in her 70.
“Among the main things I worked on during the quarantine was my short game, especially my putting, because I felt like I needed to put in some more work there so now it’s going well so far,” said Ridhima, who represented India at the 2018 Asian Games before turning pro.
“Hopefully that continues. I have also been working a lot on my fitness and trying to get some more power and increase my swing speed.”
Hitaashee Bakshi (73), amateur Sneha Sharan (70), and Seher Atwal (74) tied for sixth, while Neha Tripathi and Amandeep Drall (75) completed the Top-10.
One of the highlights of the final day was a hole-in-one by Oviya Reddi (69), who shot the best card of the day but ended T-18.
Shweta Mansingh, who was tied with Oviya for 18th place, had a superb run of birdies on the front nine, when she holed four in a row from third to sixth and another one on eighth. But she also gave away a lot of bogeys and ended with a 75.
The second leg will be held at the TNGF Cosmo Golf Course in Chennai from January 20 to 22 with the practice day being on January 19. (PTI)