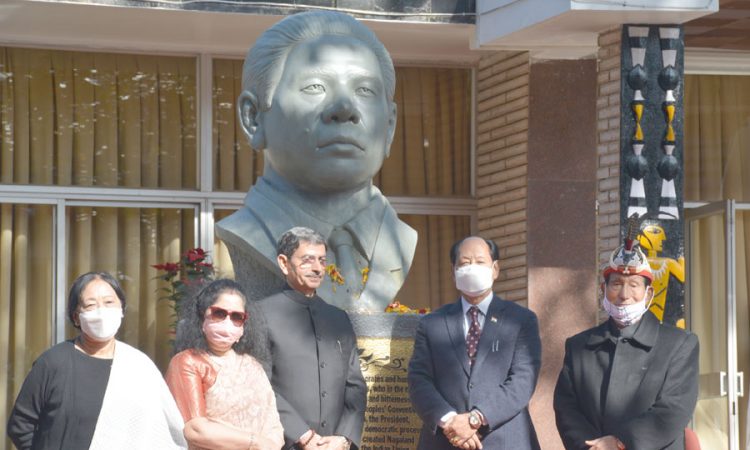 KOHIMA, DECEMBER 1: The State Government today paid rich tribute to founding members of Nagaland State through the signing of the 16-Point Agreement but said there is still unresolved political conflict.

Speaking during the unveiling of Bust of Dr. Imkongliba Ao, at Raj Bhavan today, Chief Minister Neiphiu Rio paid tribute and homage to all those who contributed, made sacrifices and experienced the blood and tears for the people to reach this far. “We pray and thank all countless Nagas who carried the Naga issue. We acknowledge the leaders and participants of the Naga People’s Convention, and we extend our gratitude to the Government of India for recognising us” he said.
Rio said today even as people make collective efforts to strive towards progress and development, they look back at the difficult times and circumstances, under which Nagaland State came into formation. “In the past several years, the journey of Nagaland has seen many ups and downs, and we are still in the midst of an unresolved political conflict. However with the dawn of statehood, Nagaland has witnessed substantial progress” he added.
He said Nagaland has emerged as a contributing State to the country’s nation building process, with Naga people making positive contributions to India’s forward march. “Nagas have given the country respected leaders in the nation’s polity and public affairs. We have produced brave soldiers who have defended our borders, our civil servants, technocrats and police officers have contributed immensely, and we have produced judicial luminaries. We have produced Olympians and world champions in the field of sports, internationally, successful musicians and artists, and members of the pan-Naga family are achieving success and excellence in the global arena” he said. But he added that Nagaland has fallen short of expectations on many fronts.
The Chief Minister admitted the State lacking in many fields like higher education, healthcare, and deficits in providing the needs of the people to pose challenges. “We must understand and accept these realities, so that the Naga family can collectively work as one team, to create opportunities that ensure a brighter and more prosperous future for the present and the future generations” he said. He also stressed on improving administration through better transparency, and make efforts to transcend the red-tape of bureaucracy, and overcome implementing hurdles, to reach genuine progress and development to all targeted sections. He also called for extending support to meritocracy and give hope to the youth, so that they can break free from the shackles that restrict them from reaching out towards their aspirations.
Rio also underlined the need for peaceful resolution of Indo-Naga political conflict through honourable solution that is acceptable to the people.
“Today is indeed an auspicious day. Dr. Imkongliba Ao was one of the pioneers and architects of Nagaland’s statehood. They belong to a generation that hailed from a different era. The challenges and difficulties they faced, prior to and during the early stages of statehood, are difficult to comprehend for us today” Rio said. He acknowledged the contributions and remember the sacrifices of the founders of Statehood.
In his short address, former Governor of Goa, Gujarat,Mahrashtra & Odisha and former Chief Minister of Nagaland, Dr S C Jamir said that unveiling of bust was a historic landmark day for the Naga people. He reminded of the struggles undertaken by the late leaders in making Nagaland a legitimate member of the Indian Union by achieving special provisions for it under Article 371-A. He further added that he was shocked by the actions of certain elements of the state and said that to such people he would like to remind them of the history of the state and the sufferings the people had to undergo.

He said that so long as the Constitution of the country was preserved, thing would be fine but any disturbance of the Constitution would result in the entire machinery to suffer.
Stating that it was our responsibility to protect and preserve the Constitution, he called upon the citizens to show the same spirit of trust and commitment showed by the late leaders to achieve their aspirations. He asked the people not to be consumed with any other name other than Nagaland and indigenous people of Nagaland and appealed to them to be realistic to consolidate their energy to rebuild a peaceful, united, progressive and strong Nagaland.
(Page News Service)