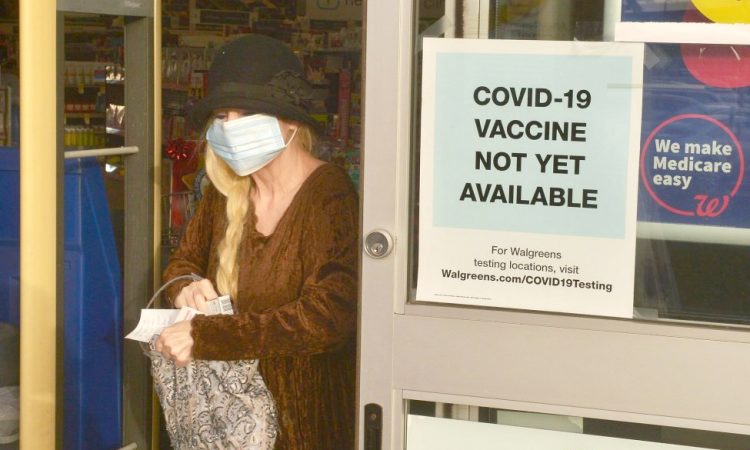 A shopper walks past a sign on the entrance to a pharmacy that reads "COVID-19 Vaccine Not Yet Available" in Burbank, Calif., on Tuesday.

London, December 9: Rich countries have hoarded enough doses to vaccinate their populations nearly three times over for Covid-19, while nearly 70 poor countries are able to vaccinate only one in 10 people next year unless urgent action is taken, an alliance of NGOs has alleged.
The People’s Vaccine, which includes Oxfam, Amnesty International, Frontline AIDS and Global Justice Now, said urgent action is needed from governments and the pharmaceutical industry to make sure enough doses are produced.
If all vaccines candidates currently in trials were approved, the alliance said, wealthier nations had bought enough doses to vaccinate their entire populations nearly three times over by the end of 2021, with Canada topping the chart with enough to vaccinate each Canadian five times.
“Updated data shows that rich nations representing just 14% of the world’s population have bought up 53% of all the most promising vaccines so far,” the alliance said.
Anna Marriott of Oxfam’ said: “No one should be blocked from getting a life-saving vaccine because of the country they live in or the amount of money in their pocket. But unless something changes dramatically, billions of people around the world will not receive a safe and effective vaccine for Covid-19 for years to come.”
So far, the alliance said, all of Moderna’s doses and 96% of Pfizer-BioNTech’s shots have been acquired by rich countries.
It added: “In welcome contrast Oxford-AstraZeneca has pledged to provide 64% of their doses to people in developing nations. Yet despite their actions to scale up supply they can still only reach 18% of the world’s population next year at most
“Oxford-AstraZeneca deals have also mostly been made with some of the big developing countries like China and India, while the majority of developing countries have not done deals and have to share the COVAX pool of vaccines between them.”
This demonstrates that one company alone cannot hope to supply the whole world, and that only open sharing of technology between vaccine producers can make this possible, the alliance said.
It called on pharmaceutical corporations to openly share their technology and intellectual property through the World Health Organisation Covid-19 Technology Access Pool, so that billions more doses can be manufactured and safe and effective vaccines can be available to all who need them. (Courtesy: HT)