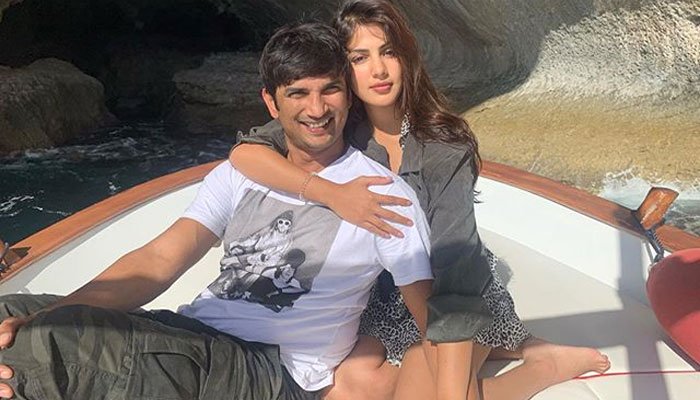 Friends of actor Rhea Chakraborty have spoken about her relationship with Sushant Singh Rajput, and the steps that the couple took together to get him treatment for his alleged mental illness. According to a HuffPost report, Rhea even turned down a couple of film offers to focus on being there for Sushant. The friends have not been named.
The actor’s need to keep his reported bipolar disorder a secret from the industry and his own family forced them to isolate themselves, the friends said. Sushant’s therapist, Susan Walker, in an earlier interview to journalist Barkha Dutt had said that Sushant had been diagnosed as bipolar. Actor’s family has dismissed the reports that the actor had a mental disease and have filed an abetment to suicide FIR against Rhea, which is now being probed by the Central Bureau of Investigation.
A mutual friend of the couple said that they moved out of Sushant’s old house and into a new one in 2019 because he felt that the old apartment was ‘bad for his mental health’. He wanted to live in a house with a bigger terrace. When they moved into the new house, they also changed much of their staff. This was done, according to the friends, to maintain privacy around’s Sushant’s mental health and prevent news about it from being leaked to the press.
One friend said that during this time, the actor retreated into a shell, and the couple would frequently cancel plans at the last minute. “I’d just get a message that she needs to be with Sushant, that he’s unwell,” the friend said, and added that Rhea devoted her time to taking care of Sushant at the expense of her career, and even opted out of two films in 2019. The friend said, “When you’re so deeply in love, you feel everything that your partner feels, you feel their pain as your own.”
“When Sushant was severely ill, he depended on Rhea as somewhat of a mother figure. Rhea gave Sushant courage to attend the sessions,” Susan Walker had said in her interview.
Rhea has been accused of abetting Sushant’s suicide, and siphoning off his funds, in the FIR filed by Sushant’s father in Patna. The case is currently being investigated by the Central Bureau of Investigation after a Supreme Court decision on the matter. It was earlier being investigated by the Mumbai Police.
The situation has left Rhea distraught, according to the friend. “They haven’t had a moment to grieve. Has anyone paused to think that here’s a young woman who lost the love of her life? It’s bonkers for us to even process the hysteria that’s unfolding right now. It’s so far from the truth, it shocks the mind,” the friend said.