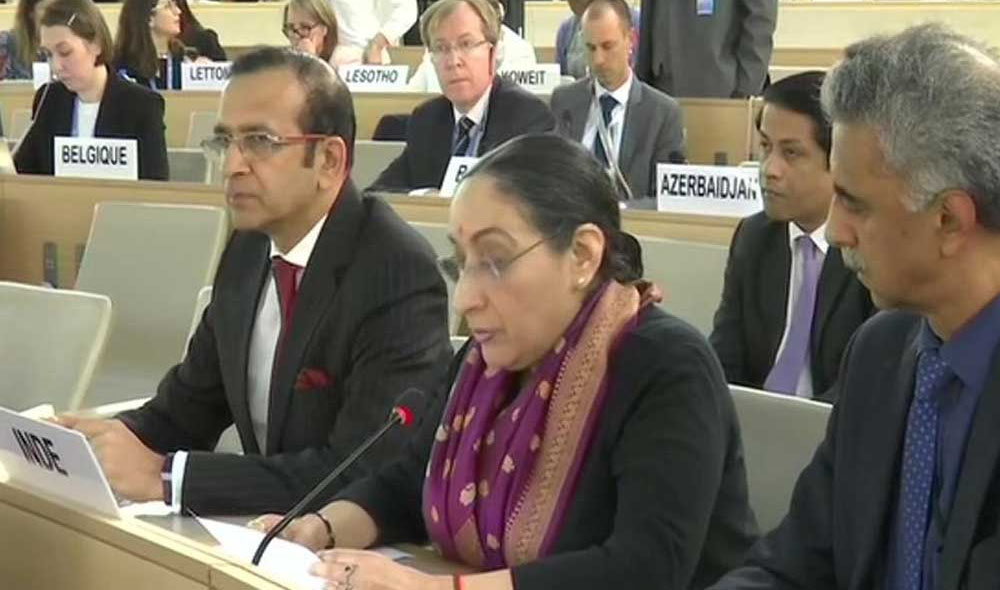 Geneva, September 10: India on Tuesday asserted that the revocation of Jammu and Kashmir’s special status was its sovereign decision and it cannot accept any interference in the country’s internal affairs, as New Delhi hit out at Pakistan’s “malicious” campaign on the issue and condemned “state sponsored terrorism”.
Secretary (East) in the External Affairs Ministry Vijay Thakur Singh, in a clear reference to Pakistan, said those who speak on the human rights of minorities in other countries are “trampling upon them at will in their own country. They cry victim when they actually are the perpetrators”.
There was a need to call out those who are misusing the United Nations Human Rights Council for “malicious political agenda under the garb of human rights”, she said, rejecting Pakistan’s charges against India on the Kashmir issue at the 42nd session of the UNHRC.
Singh, on the UN human rights chief Michelle Bachelet’s Oral Update on Monday, said the recent legislative measures taken by India in Jammu and Kashmir were within the framework of its Constitution.
Bachelet on Monday expressed “deep concern” over the impact of restrictions in Kashmir, and asked India to ease the current lockdowns to ensure people’s access to basic services.
The UN High Commissioner for Human Rights also asked Pakistan and India to ensure that the human rights of the Kashmiri people are respected and protected, amid tensions between the two neighbours after the abrogation of special status of Jammu and Kashmir by New Delhi.
“These decisions were taken by our Parliament after a full debate that was televised and enjoyed widespread support. We wish to reiterate that this sovereign decision, like other legislations passed by Parliament, is entirely internal to India. No country can accept interference in its internal affairs, certainly not India,” Singh said.
Despite challenging circumstances, she said, the administration in Jammu and Kashmir is ensuring basic services, essential supplies, normal functioning of institutions, mobility and nearly full connectivity.
“Democratic processes have been initiated. Restrictions are being eased continuously,” the senior diplomat said.
“Temporary preventive and precautionary measures were necessitated to ensure safety and security of our citizens in the face of credible threats of cross-border terrorism,” Singh said.
In an apparent reference to the Pakistani delegation led by Foreign Minister Shah Mehmood Qureshi, she said, “One delegation has given a running commentary with offensive rhetoric of false allegations and concocted charges against my country.”
“The world is aware that this fabricated narrative comes from the epicentre of global terrorism, where ring leaders were sheltered for years. This nation conducts cross-border terrorism as a form of ‘alternate diplomacy’,” Singh said.
Today, she said, terrorism poses a grave challenge to the commitment of the international community to protect the right to life and security of people globally.
“Those who abet, finance and support terrorism in any form on territory under their control are in fact the worst violators of human rights,” she said.
The world, in particular India, has suffered greatly on account of the activities by “practitioners of state sponsored terrorism” and it is time to collectively take decisive and firm action against terror groups and their abettors who threaten the fundamental human right to life.
“We must speak out. Silence only emboldens terrorists. It also encourages their intimidatory tactics. India appeals to the international community to work together in the fight against terrorism and their sponsors,” Singh said.
Earlier, Pakistan demanded an international investigation by the UN Human Rights Council into the situation in Kashmir and urged the world rights body not to remain “indifferent” after India revoked Jammu and Kashmir’s special status.
On the issue of the National Register for Citizens in Assam, Singh said it was a “statutory, transparent, nondiscriminatory legal process mandated and monitored by the Supreme Court of India”.
“Any decision that is taken during the process of its implementation will comply with the Indian law and will be in consistent with India’s democratic traditions,” she said.
Singh said India, a responsible member of the international community, firmly believes in a constructive approach to promote and protect human rights.
“We believe that human rights are best protected when national institutions are strengthened. We do so as a nation of 1.3 billion people, which embodies the highest principles of democracy, tolerance and unity in diversity,” she said. (PTI)