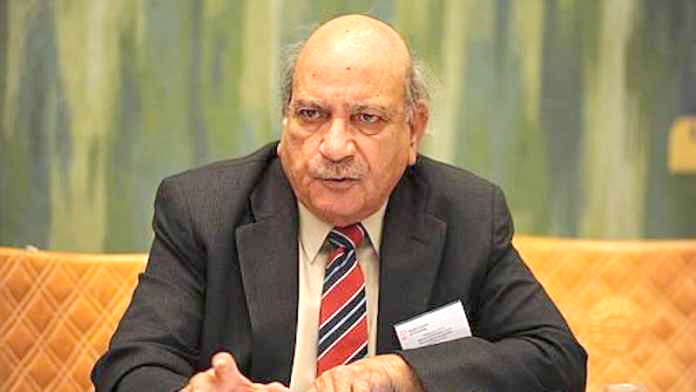 Lahore, April 12: Eminent Pakistani human rights activist and Magsaysay award winner I A Rehman, a strong voice for the country’s minorities including Christians and Hindus and an advocate of peace between India and Pakistan, died here on Monday at the age of 90, according to his family.

Rehman, who was born in 1930 in Haryana in the pre-partitioned India, worked as an Editor for various newspapers in his journalistic career spanning more than 65 years and was a founding member of the Pakistan-India People’s Forum for Peace and Democracy, the Dawn newspaper reported.
According to his family, he was diabetic and suffered from high blood pressure and his condition deteriorated a couple of days ago. He is survived by three sons and two daughters.
Pakistan Peoples Party’s Senator and his friend Sherry Rehman said that the activist died due to COVID-19.
“Shocked and immeasurably saddened to hear of I.A Rehman’s passing from COVID. He was an icon of integrity, standing steadfast for every single fundamental right, every single democratic value in the worst of times. Pakistan will not be the same without him,” she said.
“He will be deeply missed. He was a rare kind of individual, not just because of his professional capabilities but as a human being,” the report quoted as saying human rights activist and former chairperson of the Human Rights Commission of Pakistan (HRCP) Zohra Yusuf.
Rehman worked as director of HRCP for two decades and was also the group’s secretary-general till December 2016, Geo news reported.
He was a strong supporter of the country’s minorities, including Christians and Hindus, and campaigned for amendments to Pakistan’s controversial blasphemy laws. The author of three books also opposed military dictators and fought for the rule of law and democracy.
A protege of the great Urdu poet Faiz Ahmed Faiz, Rehman became Chief Editor of the Pakistan Times newspaper in 1989. Before his death, he was writing columns for Dawn newspaper.
He has numerous awards to his credit, including Ramon Magsaysay Award for Peace and International Understanding and Nuremberg International Human Rights Award.
Tributes poured in from all quarters as news of Rehman’s death spread.
Pakistan Foreign Minister Shah Mahmood Qureshi, currently in Germany on an official visit, said the country has lost a “true icon”.
“Pakistan has lost a true icon today with the passing of I A Rehman. A staunch advocate and activist for Human Rights and an intellectual, I A Rehman sahib leaves behind a rich legacy that speaks of tolerance, inclusion, equality and dignity, he said in a tweet.
Journalist Nasim Zehra called the activist the “vanguard of Pakistan’s democratic struggle”.
Human rights activist Ali Dayan Hasan termed Rehman a “human rights warrior, and a visionary leader”.
The HRCP said Rehman was a “titan of human rights .
His conscience and compassion were unparalleled. Even after his retirement from the HRCP, he remained a constant source of wisdom and advice, and a mentor to many. We will carry his legacy forward as he would have wished us to,” the HRCP said.

HRCP member and former parliamentarian Bushra Gohar said, I.A Rehman was indeed a visionary leader & a mentor. His legacy will continue to guide us in resisting #Pakistan’s worst ever #MartialLaw & #HumanRights abuses. (PTI)