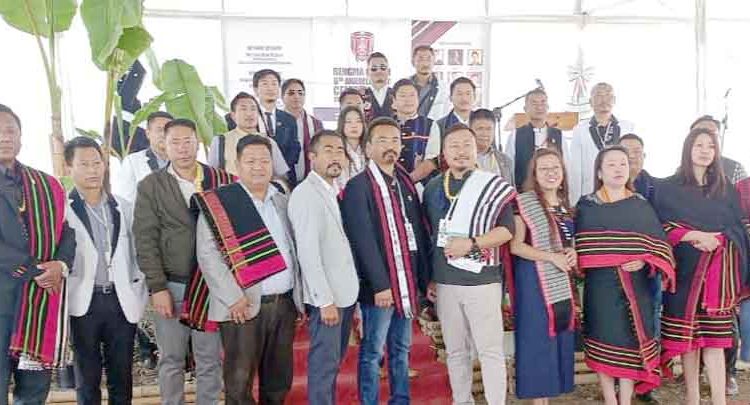 A press release from the organisers on Sunday informed that youth representatives from all Rengma villages and leaders of all Rengma organisations including Rengma Hoho, Rengma Officers’ Forum, Rengma Mothers’ Association, Rengma Students’ Organisation, Rengma Sports Association, Council of Rengma Baptist Churches, village leaders , elders, guests and well-wishers attended the event.
Angami Youth Organisation (AYO) and Lotha Youth Hoho (LYH) were special guests while Jonathan Mesen, Youth Secretary at the Council of Rengma Baptist Churches (CRBC), was the keynote speaker.
The RSZ approved its new executive council for the tenure 2021-23 and also adopted a 3-point resolution during the general assembly. Among other officials, President Kenneth Kath and General Secretary Sokenye Kent were re-elected to lead the organisation, and advisory team consisting of Prof. GT Thong, JG Lorin and Zukeya Woch was constituted.
The renowned Rengma Baptist Church Kohima choir presented a song while Pastor Hisinlo Khing pronounced the prayer for anniversary feast. Benlo Thyüg greeted the gathering on behalf of the hosts while President Kenneth Kath delivered the words of gratitude.
Kekhrie Pfukha, President of AYO, in his solidarity speech, iterated the need to strengthen the bond of brotherhood among the Tenyimia family while adding that ‘Tenyimia’ is not a political body but a fraternal family based on ancestral root.
Further, he encouraged the members of RSZ and the Rengma community as a whole to go beyond the parameters of their confinement, connecting with the rest of the Nagas and beyond while ‘working towards common stability among the Nagas’.
N Yanpothung Ezung, President of Lotha Youth Hoho, appreciated the various activities undertaken by RSZ for the welfare of its members citing few developmental works which are being carried out in Rengma area and the selfless service rendered by the organisation during the pandemic.
While extending solidarity to the RSZ in its journey ahead, he also added that when people of different tribes, race and region come together, they can create extraordinary things and that the key is to cultivate the culture of unity.
Jonathan Mesen, speaking on the theme, stressed on the need to raise a new generation of leaders to lead the mass. He exhorted that this new breed of leaders must have vision for the common welfare.
“We need leaders who stands for truth…and have conviction, commitment and vision for our people, and one who will put his career at stake for community welfare,” he said.
Mesen also said that as leaders one must not shy away from the truth and must not seek to please everyone.
Following the anniversary feast, a symposium on contemporary Rengma issues was also held with Prof. GT Thong (Department of Geology, Nagaland University) and Awa Lorin (Deputy Chief Electoral Officer and President of Rengma Hoho) as symposium speakers and Dr. Lilongchem Thyüg as the speaker.