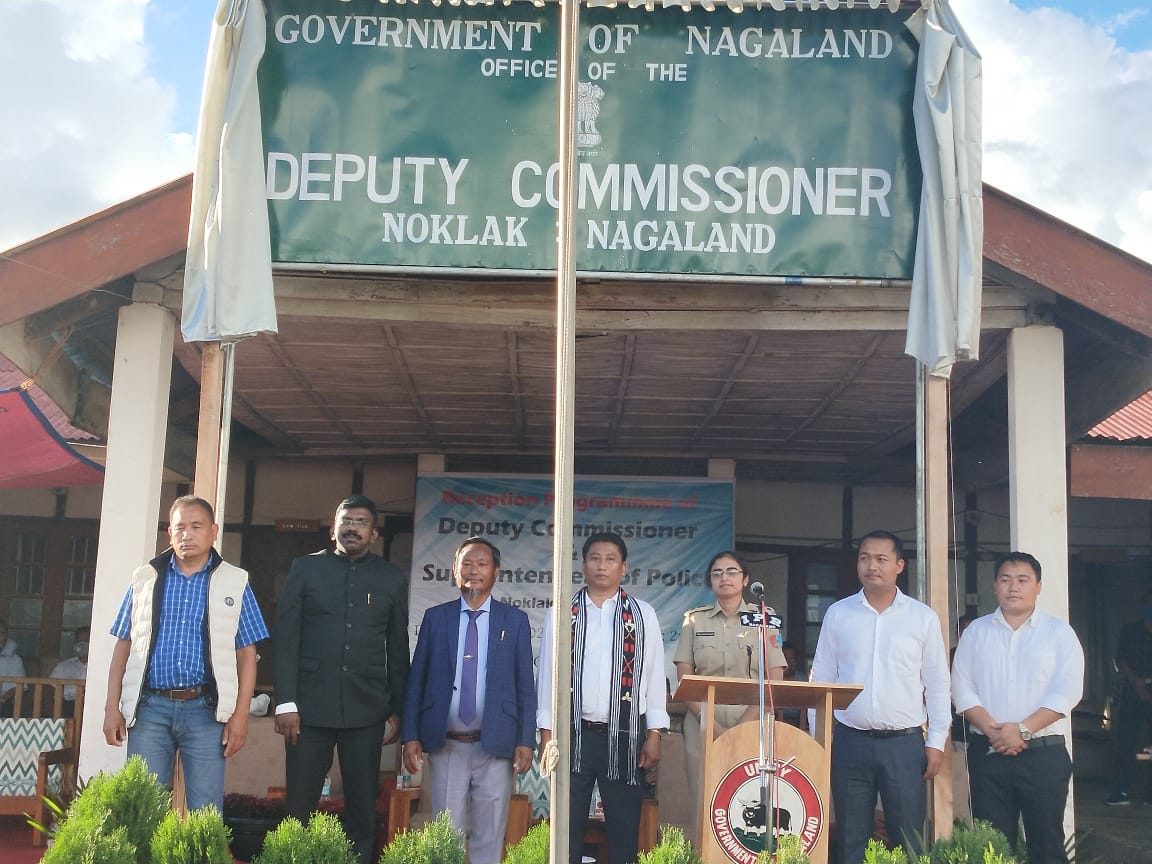 Dimapur, August 7: With the creation of Noklak as the 12th District of Nagaland, reception programme of the First Deputy Commissioner and Superintendent of Police of Noklak was held on August 6 at DC Office Complex, Noklak.
Speaking on the occasion, Advisor, Fisheries & Aquatic Resources, Evaluation, Economics & Statistics, L Khumo on behalf of Khiamniungan people thanked the Chief Minister of Nagaland Neiphiu Rio, Deputy Chief Minister of Nagaland, Dy. CM Y Patton, Cabinet Ministers, Advisors, MLAs and the government for magnanimous generosity towards the people of Khiamniungans for consenting Noklak as the 12th district of Nagaland.
“Today we are here with Deputy Commissioner of Noklak Reny Wilfred, IAS and Superintendent of Police, Dr.Pritpal Kaur Batra, IPS whose names will be remembered for generations by the people of Noklak,” Khumo said and hoped that they would bring positive changes to the newly created district, Khumo added.
The advisor also stated that although we are still lacking behind in every spheres he urged upon the people to be law abiding citizens and give continuous support.
Advisor, Prisons and Printing & Stationery, H Haiying, said, ‘6th August will be a historic day for the people of Noklak’. The people are living in remoteness and underdeveloped region and with the creation of the district is a fulfilment of our long felt dreams of the people, he said.
The Advisor stated that today, DC& SP are taking their respective responsibilities to lead the people of the district for all round development.
Welcoming the first DC & SP, Haiying said that challenging tasks are ahead of them. The advisor urged all the citizens of Noklak district in particular; state and country in general to extend full co-operation and work for the up-liftment and development of the newly born Noklak district.
The first Deputy Commissioner of Noklak, Reny Wilfred, IAS in his speech sought co-operation from Civil Societies, Churches, NGOs, different civil organizations also expressed his happiness for the warm reception by the district people. Health, Education, Skill Development, Agri etc. are some of the sectors where necessary facilities needs to be address and look forward, DC added.
The first Superintendent of Police of Noklak, Dr. Pritpal Kaur Batra, IPS in her speech expressed that, she is happy to be posted in such a far flung area where she hope to bring positive changes. She said that Khianmiungans are very talented and hardworking and if we work together then changes will.
President, Khiamniungan Tribal Council, L. Ngon in his speech expressed his gratitude to the PDA led government led by Chief Minister of Nagaland Neiphiu Rio, bureaucrats led by Chief Secretary, and the support made by all tribes and NGOs for creating Noklak as the 12th district of Nagaland.
The programme was chaired by SDO (Civil) Noklak C.Puniang and special number was presented by B. Hangming. Rev. Pinglang led the dedication of DC office which was followed by unveiling of Office signboard by the Advisors.
Meanwhile, Nokmei Kam (Peace Morung) which was constructed at DC Official residence at Noklak was dedicated by Rev. Hempao ES, KBCA.
(Page News Service)