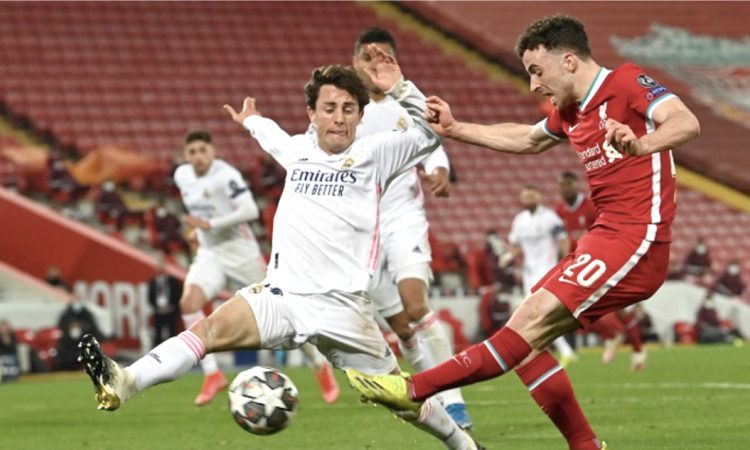 LIVERPOOL, April 15: Real Madrid moved into the semi-finals of the Champions League after their makeshift defence held on for 0-0 second-leg draw with Liverpool at Anfield on Wednesday to complete a 3-1 aggregate win.

The Spanish side will face Chelsea in the last four as they search for their fifth Champions League title in eight years.
Liverpool, the 2019 Champions League winners, created enough chances in the opening 45 minutes to have turned the tie around but they ran out of ideas in the second half.
Juergen Klopp had hoped that a disappointing Premier League campaign could be compensated for with some end of season European excitement but his side still look well short of the thrills they produced in the past two seasons.
“You always need the key moments. We didn’t lose the tie tonight, we lost in Madrid. We didn’t score and then the experience of Real Madrid played the tie out,” said Klopp.
“We love this competition and for other reasons it is very important we are back in it. We can now concentrate on the Premier League and we will.”
With no crowd at Anfield, this was never going to be a dramatic and emotional night like the memorable comeback victory over Barcelona two years ago but Klopp will surely feel that a chance of progress was missed against a weakened Real without skipper Sergio Ramos and his central defensive partner Raphael Varane.
Liverpool came out with intent and aggression and soon had Real on the back foot. Sadio Mane fed Mohamed Salah for an early chance but the Egyptian shot straight at Thibaut Courtois, who saved with his legs.
Klopp had clearly targeted Real’s stand-in right-back Federico Valverde as a potential weak spot and the Uruguayan struggled to cope with Mane in the opening stages.
A flowing attacking move, reminiscent of Liverpool at their best, ended with a curling shot from James Milner which Courtois did well to tip wide.
But Liverpool had their own defensive vulnerabilities exposed in the 20th minute when Nathaniel Phillips was robbed by Karim Benzema and the Frenchman weaved his way into the box before his deflected shot struck the post.
Salah then had another opening but scooped his shot, from a promising position, high and wide and then the best chance of the half fell to Georginio Wijnaldum — after good work from Trent Alexander-Arnold, the Dutchman leaned back and put his shot well over the bar.
The home pressure continued after the break with Roberto Firmino testing Courtois at the near post with a fine shot on the turn.
Klopp threw on Diogo Jota and Thiago Alcantara on the hour in search of the breakthrough but it so nearly came at the other end — Alisson Becker doing well to race off his line to foil Vinicius Jr and then smother Benzema’s follow-up.
Real were in no mood to cave in and Liverpool did not have the inspiration needed to open them up and while their display was creditable, they could not do enough to make up for their defensive errors in the first leg loss.
Neither of these sides were at their peak in these two-legs, both showing the effects of injuries and the tough schedule this season, but it is the 13-times European champions who deservedly progressed.
Klopp has been without Virgil van Dijk throughout this campaign and he will not miss the irony in losing out to a team also missing their top defenders.
“We had some huge absences, Ramos and Varane are two pillars of this team,” said Real’s Brazilian midfielder Casemiro.
“But Nacho and (Eder) Militao showed they are good enough to play for us too, they keep proving they have what it takes to play for Real Madrid.
“We knew it was going to be difficult considering who we were playing, we know how hard it is to play here, but the team did a fantastic job and every player played their part.”
Manchester City reach Champions League semifinals with 2-1 win at Borussia Dortmund

Manchester City scored twice in the second half through Riyad Mahrez and Phil Foden to beat Borussia Dortmund 2-1 on Wednesday and reach the Champions League semi-finals for the first time in six years.
Foden, who scored the winner in their 2-1 first-leg victory, fired in off the post in the 76th minute after Mahrez had converted a 55th-minute penalty to secure a 4-2 aggregate triumph and send City into the last four for the second time.
“It means a lot, this club this team deserves it,” City midfielder Ilkay Gundogan said. “We are grateful for being in a great competition, reaching the semi-final for the first time with this team.
“This Borussia team has a lot of quality,” he said. “On a good day they can beat everyone. It’s about staying in the game, attitude, personality, especially in that stage of the competition.”
Dortmund had gone ahead when striker Erling Haaland chased down a deep cross, the ball falling to Jude Bellingham and the teenager curling his shot into the top corner in the 15th minute for his first Champions League goal.
Premier League leaders City, eliminated in the quarter-finals of the competition in the previous three years, will face Paris St Germain in the semi-finals after the French champions knocked out holders Bayern Munich on Tuesday.
City manager Pep Guardiola reached his eighth Champions League semi-final as a coach, equalling Jose Mourinho, and his first with the English club.
SEVEN CHANGES
The Spaniard had made seven changes from Saturday’s team that lost to Leeds United but it was Dortmund who looked fresher and went ahead through a fine strike by English teenager Bellingham who scored his first Bundesliga goal at the weekend.
City, faced with a fourth consecutive quarter-final exit, upped the tempo and Kevin De Bruyne rattled the post with a 25th-minute shot.
Mahrez was denied by Bellingham’s clearance as City took control of the game, but the Algerian did better 10 minutes after the restart when he converted a spot-kick awarded for a handball by Dortmund defender Emre Can, whose mistake also gifted City their opening goal in the first leg.
The hosts tried hard to get back into the game and Mats Hummels’ 69th-minute header fizzed narrowly over the bar.
The Germans, however, were opening up more as they looked for the winner that would take the game into extra time and City found the space they needed to strike again.

De Bruyne forced a good save from Dortmund keeper Marwin Hitz in the 75th minute before Foden scored with the very next move to settle the tie and keep City on course to win four major trophies this season.
“Obviously, this is bitterly disappointing. We were in the next round after three of the four halves in this tie,” said Dortmund coach Edin Terzic.
“We tried to keep it tight and we managed to do that for much of the game. Now we will spend the remainder of Wednesday feeling disappointed.
“But City played outstanding football in both matches and deserved to go through,” he said. (Reuters)