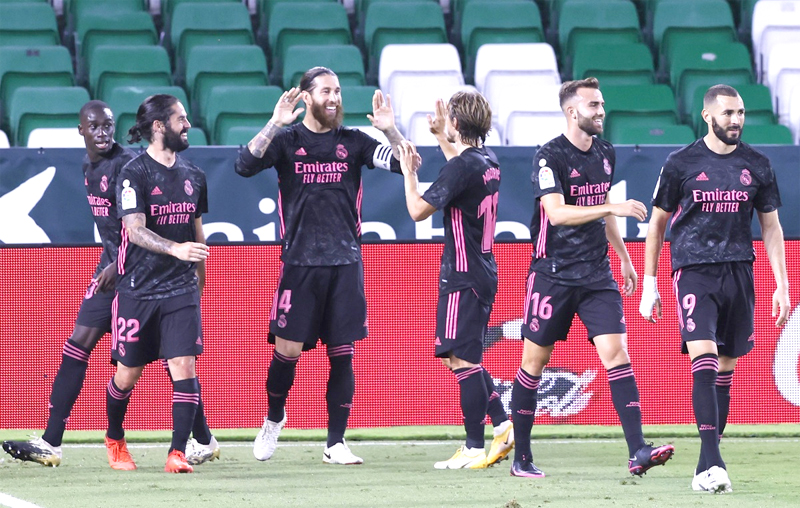 SEVILLE, September 27: Real Madrid edged Real Betis 3-2 in an eventful game for their first win of the La Liga season on Saturday, thanks to a late Sergio Ramos penalty that was furiously protested by the hosts.
Madrid captain Ramos again showed nerves of steel to chip the ball into the net from the spot after a VAR review for a handball by defender Marc Bartra, who appeared to have been pushed by visiting forward Borja Mayoral.
Earlier in the second half, Betis defender Emerson was shown a straight red card for a foul on Luka Jovic following a VAR review, while Madrid’s equaliser, given as an own goal by Emerson, was awarded after another VAR intervention ruled that Karim Benzema had been onside in the build-up.
Uruguayan midfielder Federico Valverde had given the champions a 14th minute lead with a close-range finish after fine work by Benzema on the byline.
But Betis struck twice in quick succession through Aissa Mandi and William Carvalho to take a 2-1 halftime lead.
After drawing their first game of the season 0-0 at Real Sociedad, Madrid coach Zinedine Zidane ripped up his usual 4-3-3 formation for a 4-4-2 and handed a rare start to 60-million euro ($69.78 million) striker Luka Jovic, who partnered Benzema.
The Serbian offered little in attack during the game but still played a decisive role in the win, drawing the foul from Emerson which saw the Brazilian sent off in the 68th minute.
Madrid’s run to last season’s title was aided by a series of refereeing decisions going their way, but Ramos did not think his side were receiving special treatment.
“Sometimes the referee goes against us, other times the decisions are in our favour, but I don’t think it’s intentional at all,” said the defender, who finished last season with a career-best 11 goals.
Ramos also said his side needed to be more consistent.
“It was a difficult game but this is what makes football special. We played well in the first 15 minutes then we gifted them the ball and a team like Betis who know how to play well will always create chances and score against you,” he added.
“We have to learn from today because we’re not always going to be able to react like we did. But today we got away with it as we had an excellent second half.” (Reuters)