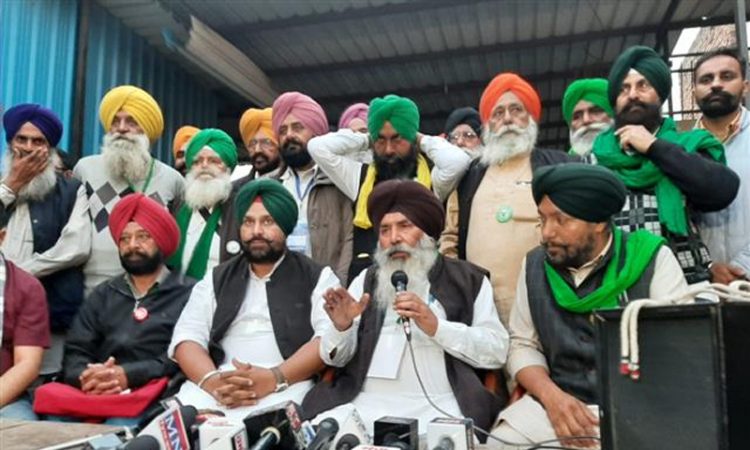 New Delhi, December 12: Sticking to their demands, farmer leaders Saturday said they are ready to hold talks with the government, but will first discuss repealing the three new farm laws, and announced that representatives of their unions would sit on a hunger strike during a nationwide protest on December 14.

Addressing a press conference at Singhu Border here, farmer leader Kanwalpreet Singh Pannu also said that thousands of farmers will start their ‘Delhi Chalo’ march with their tractors from Rajasthan’s Shahjahanpur through the Jaipur-Delhi Highway at 11 am on Sunday.
The distance between Shahjahanpur and Delhi-Gurgaon border is around 94 kilometres.
Spelling out their strategy to make the agitation even “bigger”, the farmer leader announced that their mothers, sisters and daughters will also join them soon, and that arrangements for their stay are being made at the protest sites.
Farmers’ move to further intensify their agitation comes on a day Prime Minister Narendra Modi assured them that his government was committed to their welfare and that the three legislations were aimed at giving them alternative markets to boost income.
Without directly referring to the farmers’ agitation, which entered the 17th day on Saturday, Modi said at the annual meeting of industry body FICCI here that agriculture reforms as part of government efforts are aimed at removing roadblocks, and the new laws will also bring in technology and investment in the sector.
During the press conference later in the day, farmer leader Pannu said that farmers from other parts of the country are also on their way to join the protesters at camping at various borders of the national capital.
He said the police are putting up barricades to prevent the farmers from heading towards Delhi, but asserted that they will join the protest anyhow and take it to the next level in the coming days.
“If the government wants to hold talks, we are ready, but our main demand will remain the scrapping of the three laws. We will move onto our other demands only after that,” Pannu said.
Farmer union leaders will also sit on a hunger strike between 8 am and 5 pm at the Singhu Border during the nationwide protest on December 14 against the new agriculture laws, he said.
Pannu alleged the government tried to weaken their agitation, but that the protesting farmers did not let that happen. The farmer leader vowed to keep the protest peaceful.
“The government tried to weaken our agitation by dividing us (various farmer unions). I want to say that the ongoing agitation is fully under control of 32 farmer unions. We will fail every government attempt to divide us,” Pannu also said.
The government had on Friday asked the protesting farmers to be vigilant against their platform being misused, saying some “antisocial” as well as “Leftist and Maoist” elements were conspiring to spoil the atmosphere of the agitation which has been going on for over two weeks now.
Photographs of some protesters at the Tikri border seen holding posters demanding the release of activists arrested under various charges had gone viral, prompting Agriculture Minister Narendra Singh Tomar to say that these “antisocial elements” are conspiring to spoil the atmosphere of the peasants’ movement under the guise of farmers.
Earlier this week, farmers had given a call to make all toll plazas “free”, and block the Jaipur-Delhi Highway on December 12.
“All toll plazas in Haryana were made free today. In Punjab, toll plazas have remained free since October 1,” Pannu told reporters when asked about their announcement.
Some union leaders said that farmers could not block the highway on Saturday because most of them were on their way to Delhi from remote areas of Rajasthan and Haryana.
“Also, police barricades have been up on several road stretches that’s why farmers could not reach Delhi on Saturday. All farmers have assembled near Rajasthan’s Shahjahanpur on Saturday and tomorrow morning, they would head towards the national capital,” Pannu added.

Enacted in September, the three farm laws have been projected by the government as major reforms in the agriculture sector that will remove the middlemen and allow farmers to sell their produce anywhere in the country.
However, the protesting farmers have expressed apprehension that the new laws would pave the way for eliminating the safety cushion of Minimum Support Price and do away with the mandi system, leaving them at the mercy of big corporates. (PTI)