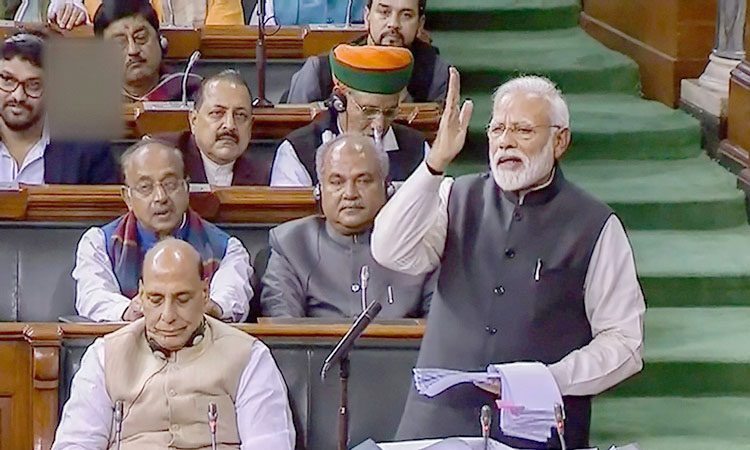 New Delhi, February 7: Prime Minister Narendra Modi addressed the Parliament on Thursday even as the Opposition wants a debate over various issues, including the farm crisis, unemployment and alleged misuse of constitutional bodies.
PM Modi said, “I wish for healthy competition in the upcoming elections. I would also like to encourage all those youth who will be voting for the first time.”
While addressing the Lok Sabha, Modi said that his govt is known for honesty and it is a government for the poor.
“Our friends in the Congress see things in two time periods. BC, which is ‘Before Congress’, when nothing happened and the other, is AD-‘After Dynasty’- where everything happened,” PM added.
Attacking the Opposition, PM Modi said, “You want to know what is my crime for them? That I am a person born in a poor family and is challenging their ‘Sultanate’. In 55 years of their rule, sanitation coverage was around 38 per cent and in our 55 months, it is nearly 98 per cent. See Congress manifestos of 2004, 2009 and 2014. In all the manifestos you have promised that within 3 years every house will have electricity. I am amazed at this.”
“Gas connections in their 55 years of rule were 12 crore , it is 13 crore in our 55 months. We have worked at much faster speed in our five years,” he added.
Continuing his attack, PM Modi said, “India is now the 6th largest economy in the world from the 11th largest within 4.5 years. When India became the 11th largest, people of the opposition praised themselves. Now the same people are saddened when we reached 6th position.”
“Congress insults Army, calls the Army Chief a ‘Gunda’ but it is Modi who is destroying institutions? Congress leaders create stories that Indian Army is planning a coup but it is Modi who is destroying institutions?,” he added.
Lashing out at Mamata Banerjee’s rally in Kolkata where all the opposition leader were present, PM Modi said people have seen the work a government with an absolute majority can do and do not want a ‘Mahamilavat’ government of those who recently gathered in Kolkata.
“We speak truth, be it in country or outside, in Parliament or outside but your ability to listen to truth has dimished,” PM to opposition.
“It is trust and optimism that will take our nation forward; We are not those who run away from challenges,” PM said lashing out at Congress.
“Indira Gandhi dismissed state governments 50 times,” says PM replying to debate on motion of thanks to President’s address in Lok Sabha.
Hitting out again at the Opposition, PM Modi said, “In 2014, the people of this country elected a government with majority and the country has experienced what happens when a ‘milavati’ government come into power and that is what is going to come. This ‘milavat’ won’t come to here, gather these people in Kolkata only.”
Questioning Congress’ motive to bring down the Rafale deal, PM Modi also said, “Congress doesn’t’ want our Air Force to be strong, I am levelling a serious allegation here. You want this Rafale deal to be cancelled, on whose behest? For which company?”
” Mahatma Gandhi had back then recommended the dissolution of Congress party. So ‘Congress mukt Bharat’ is not my slogan but I am just fulfilling the wish of Gandhi ji. I have to do this in his commemoration and no amount of ‘milavat’ is going to help you.”
Talking about the economic offenders who have fled the country, PM Modi has said, “Those (economic offenders) who have fled are now crying and Tweeting that I fled with Rs 9000 crores but Modi has forfeited Rs 13000 crores. They are tweeting and saying that twhen they wake up, they realize that their ill-gotten wealth has been detected and has been forfeited.”
“99 agricultural schemes which were stuck, are being completed by us now,” PM Modi said, talking about farmer plight.
Nearly 65 lakh people were registered in National Pension system: PM Modi.
Criticizing the opposition parties in the states, PM Modi said, “Some states are saying that they won’t accept (the farmer) scheme. Why don’t they ask the farmers that there is Rs 6000 for them, do they want it or not? You don’t want to give one rupee. You’ll say you won’t accept Ayushman Bharat, think of the poor people of your states. This kind of politics will go on.” (Agencies)