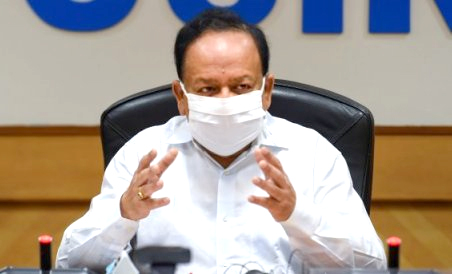 New Delhi, September 15: Re-purposed hydroxychloroquine is being used for mild but high risk and moderate COVID-19 cases, Union Health Minister Harsh Vardhan said in Rajya Sabha on Tuesday.
According to the data shared by the minister, the Department of Pharmaceuticals has increased the production of hydroxychloroquine manifold and the health ministry has issued 10.84 crore tablets of the drug to states and union territories as on September 11.
“India has also exported it (hydroxychloroquine) to more than 140 countries,” Vardhan said.
He also said there is a plan to conduct trial of ayurvedic medicines such as aswagandha, guduchi, pippali etc to prevent people from getting infected from COVID-19.
The minister said no specific antivirals have been proven effective so far and symptomatic treatment for fever and cough, appropriate rehydration, supplemental oxygen therapy remains the mainstay of treatment.
“We have re-purposed the drug hydroxychloroquine for mild (but high-risk cases) and for moderate cases. This was done with limited scientific evidence but well acknowledging that this drug has been used widely in India for other ailments where it is used for prolonged periods of time, with good safety profile,” Vardhan said.
The government has also made provisions for investigational therapies and has also been made for using Remdesivir, Convalescent plasma and Tocilizumab for managing severe cases under close medical supervision, he said.
There are thirteen clinical trials of repurposed drugs and harnessing of traditional knowledge using the modern medicine approach are building a portfolio of therapeutic options for COVID-19 patients.
Phase 2 clinical trial of immunomodulator Sepsivac has been completed successfully and clinical trial of the first-ever phytopharmaceutical ACQH is underway, the minister said.
“One prophylactic trial of Aswagandha and three trials of Guduchi + Pippali; Yashtimadhu; and polyherbal AYUSH drug (AYUSH-64) are planned on moderately ill Covid19 patients,” he said.
The minister said that more than 30 vaccine candidates have been supported which are in different stages of development, 3 candidates are in advanced stage of Phase I, II and III trials and more than 4 are in advanced pre-clinical development stage in India.
Government action of nationwide lockdown, community involvement etc has prevented up to 38 thousand deaths and 29 lakh COVID-19 cases in the country, the minister said.
He said a total of 45,62,414 confirmed cases and 76,271 deaths have been reported in India out of which as many as 35,42,663 cases, 77.65% of total, have recovered.
“The maximum cases and deaths have been primarily reported from Maharashtra, Andhra Pradesh, Tamil Nadu, Karnataka, Uttar Pradesh, Delhi, West Bengal, Bihar, Telangana, Odisha, Assam , Kerala & Gujarat. All these States have reported more than one lakh cases,” Vardhan said.
He said that government efforts have been able to limit its cases and deaths per million to 3,328 cases per 10 lakh and 55 deaths per 10 lakh population respectively, which is one of the lowest in the world as compared to similarly affected countries.
The minister informed Rajya Sabha that from a situation of a single laboratory equipped to undertake testing for COVID in January, presently 1705 laboratories are conducting COVID-19 Testing.
According to the minister, the COVID-19 test has reached 10 lakh tests a day which translates to 720 tests per 10 lakh population per day.
The central government has issued orders to purchase 60,948 ventilators to meet any contingencies and as on September 11, states have been allocated 32,109 ventilators of which 30,170 have been delivered. (PTI)