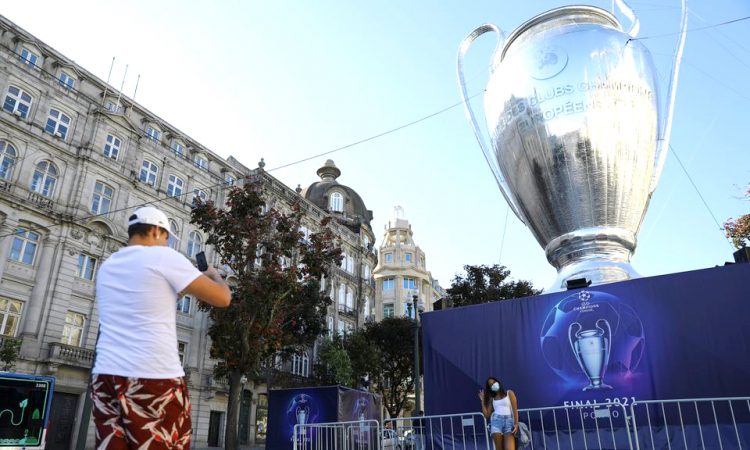 People take pictures in front of an inflatable model of the Champions League cup in Porto's central Aliados square as thousands of English fans make their way to Portugal's northern city for the League's final match and hotels and bars hope for a boost after the tourism sector was ravaged by the coronavirus disease (COVID-19) pandemic, in Porto, Portugal May 26, 2021. REUTERS/Violeta Santos Moura

PORTO, May 27: As thousands of English football fans flock to Portugal’s city of Porto for Saturday’s Champions League final, hotels and bars are hoping the tourism boost will be a prelude to their emergence from a collapse brought on by the Covid-19 pandemic.

Standing in the lobby of the NH Collection hotel in the heart of Porto, general manager Francisco Brito could not hide his happiness. His hotel is fully booked for the first time in months thanks to the clash between Manchester City and Chelsea, he said.
“It is definitely a boost for most hotels,” Brito told Reuters as a couple checked in behind him. “No one ever thought we could experience such a brutal hit … it is a huge satisfaction to be back in business.”
Portugal’s once-booming tourism sector suffered its worst results since the mid-1980s last year as Covid-19 grounded flights and kept visitors away.
Tourism businesses across Porto – home to the famous Port wine cellars and the meaty “Francesinha” sandwich – have been mostly empty, leaving workers in a tight spot. Many were pushed into unemployment.
Those who managed to stay afloat breathed a sigh of relief when this month UEFA moved the final from Istanbul to Porto’s Dragao Stadium after Turkey was added to the British government’s coronavirus travel-ban “red list”.
Some of the city’s hotels were able to finally reopen as demand grew exponentially due to the match, NH’s Brito said.
Although most of the 16,500 fans who will be allowed into the stadium will have to complete the trip within 24 hours of the final and remain in a bubble during their stay, many others have been travelling to Porto to support their teams from the sidelines.
Olivier Ramadas, co-owner of sports bar Adega, said calls and emails from fans wanting to book a table for match day started pouring on the day of UEFA’s announcement.

“When we received the news we felt a huge joy,” he said as English fans who arrived a few days early drank pints of beer and chatted. “It will revive the city.” (Reuters)