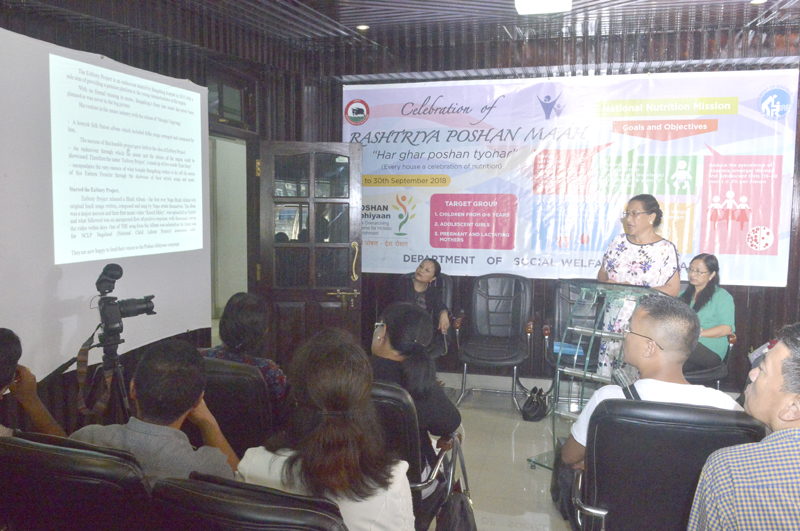 Dimapur, September 8: The launching programme for ‘Rashtriya Poshan Maah’ cum launching of Brand Ambassador was held Saturday in the conference hall, Ura Hotel, Kohima.
Speaking on the occasion, Secretary, Social Welfare, Sarah R. Ritse said that Prof. Alongla P. Aier was selected as the Brand Ambassador for ‘Rashtriya Poshan Maah’ after much thoughts and deliberations which was approved with the conscience of all the allied departments. She described her as a woman of faith, reputation, a role model to many and a woman who have done much for the nutrition and health of women and children.
Brand Ambassador for Rashtriya Poshan Maah, Prof. Alongla P. Aier while launching the programme said that in India although there is economic growth of nearly 10% annually, the rate of under nutrition remains very high. 48% children under the age of 5 are stunted due to chronic under nutrition which was largely due to the chronically undernourished of Indian women. She added that 36% of Indian women are chronically undernourished and are affected more than men due to specific nutrition needs of women during adolescence, pregnancy and lactation. These under nourished children were likely to suffer from infections leading to early death, they do not perform well in schools and as adults they are less productive and women are at greater risk of pregnancy complications and death which hinders India’s Socio-economics development and potentials, especially in the fight to reduce poverty
In such a scenario, Prof. Alongla P. Aier said Poshan Abhyaan, the PM’s overreaching scheme for holistic nourishment, under the flagship of Ministry of Women & Child Development, Govt of India, is most needed and welcome intervention to face the challenge of under nutrition of the country. She said that Poshan Abhyaan is aimed at reaching to every household with the message of nutrition, creating platforms, campaigns and common messages which she assured that it can be a sure sign of success if carried out in unity.
The Brand Ambassador, Prof. Alongla P. Aier also launched the Rashtriya Poshan Abhiyaan campaign theme song arranged and composed by Bangshing Konyak of EaStory Project.
Joint Secretary, Youth Resources & Sports, Lima who also spoke on the occasion said that the Department of Youth Resources and Sports will also be initiating a rally ‘Yuva Shakti Rally’ on September 15 to spread the message of Rashtriya Poshan Maah.
The programme was chaired by Additional Director & State Nodal Officer Poshan Abhiyaan Department of Social Welfare, Tulula Pongen. (Page News Service)

HRLN, NMA organizes workshop on Human Rights and use of law in Nagaland