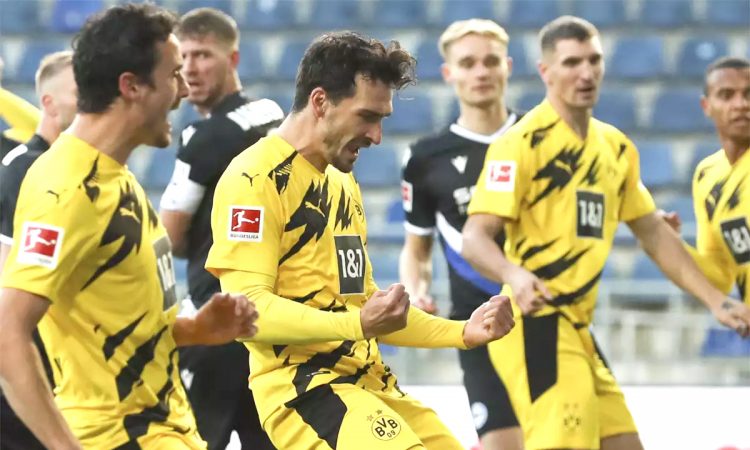 BERLIN, November 1: Borussia Dortmund defender Mats Hummels scored twice in the second half as they beat Arminia Bielefeld 2-0 to move level on points with leaders Bayern Munich on Saturday.
It was the first time since 2010 that the 31-year-old centre back had managed two goals in a league game.
Hummels, taken off injured late in the game, is hoping to be fit for Wednesday’s Champions League match at Club Brugge.
With 73% possession in the first half, Dortmund, who were missing injured striker Erling Haaland, had the upper hand but carved out few clear chances.
It was appropriate that they scored with a scrappy goal from Hummels, who pushed the ball over the line with his knee at the far post in the 53rd minute.
The 2014 World Cup winner headed in his second from a Marco Reus cross in the 71st before going off 15 minutes later.
“We did a good and serious job today. A very mature performance,” Hummels said. “The thigh muscle pulled a bit. It is now very tight and we will need to work on it. But I hope to beat the race against the clock for Wednesday.”
Dortmund are level with leaders Bayern, who beat Cologne 2-1, on 15 points ahead of their clash next week.
RB Leipzig are third with 13 after a 1-0 loss to Borussia Moenchengladbach — their first league defeat of the season. (Reuters)