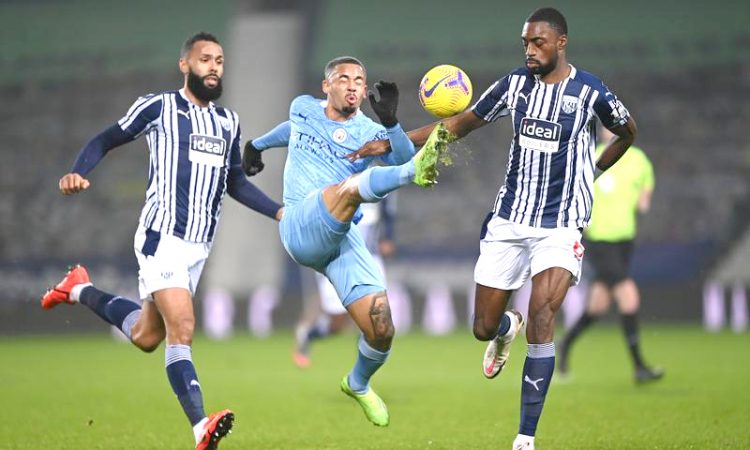 WEST BROMWICH, January 27: Manchester City returned to the top of the Premier League table in emphatic fashion on Tuesday by crushing West Bromwich Albion 5-0 at the Hawthorns.

City, who scored three goals in the opening half hour, have 41 points, one more than rivals Manchester United who have also played 19 games and will return to the summit if they beat bottom club Sheffield United at Old Trafford on Wednesday.
Ilkay Gundogan put City ahead in the sixth minute, showing great control as he collected a pass from Joao Cancelo and curled a shot into the far corner.
Cancelo then made it 2-0 with another fine strike into the same corner, although West Brom were unhappy that the assistant’s flag had been raised before his shot.
The impressive Gundogan added his second and City’s third on the half-hour, when he robbed Romaine Sawyers on the edge of the box, danced past Dara O’Shea and fired home.
On the stroke of halftime, Riyad Mahrez made it 4-0 with a trademark strike, cutting in from the right and blasting a left-foot shot into the far top corner past the helpless Sam Johnstone.
Mahrez turned provider after the interval, with his low ball across the face of the penalty area tapped in from close range by Raheem Sterling in the 57th minute.
The win was Pep Guardiola’s team’s 11th straight victory in all competitions.
Struggling West Brom remain second-bottom on 11 points, six points from the safety zone. They have conceded 22 goals in their last five home league games, the most a team have conceded across five top-flight matches since Aston Villa in December 1935 (22). (Reuters)