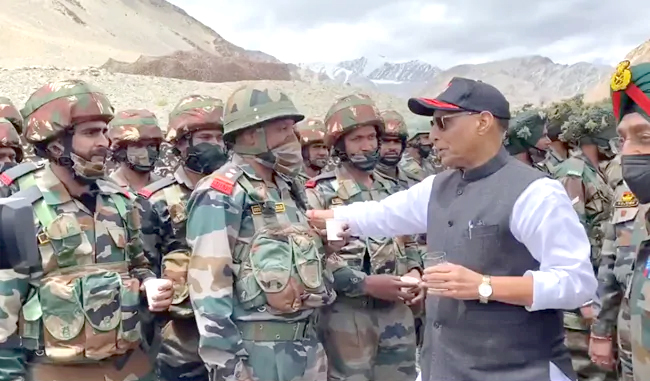 New Delhi, July 19: Defence Minister Rajnath Singh met the soldiers of the Bihar Regiment during a visit to forward areas in Ladakh, his office said on Sunday. The Bihar Regiment had lost 20 soldiers in a deadly clash with the Chinese Army in the Galwan Valley last month.
Mr Singh’s office tweeted a video of the Defence Minister speaking with the soldiers, patting them on the shoulder.
Visiting Ladakh on Friday, Rajnath Singh had referred to the Galwan Valley clash in which the Chinese also took an unspecified number of casualties, saying the Indian soldiers killed in the incident not only showed exemplary courage in safeguarding the border but also protected the pride of 130 crore Indians.
“I want to say that the country will never forget them. You inspire the whole nation. We do not want unrest, we want peace. We never hurt the pride of any country. But if any country tries to hurt our self-respect and pride, we will not tolerate it at any cost. We will give a befitting reply,” he had said.
In an address to a group of army and Indo-Tibetan Border Police (ITBP) personnel in Lukung in eastern Ladakh, Mr Singh said India is not a weak country and it will give a fitting reply to anyone hurting its national pride.
He said that progress has been made in the ongoing talks with China to find a solution to the border standoff in Ladakh but he cannot guarantee to what extent it would be resolved as he proclaimed that no power in the world can take even an inch of the country’s land.
“Talks are underway to resolve the border issue (with China). Whatever progress has been made, the issue should be resolved. But, I cannot give a guarantee to what extent it will be resolved. I want to assure that no power in the world can touch even one inch of India”s land or can occupy it,” he said from a makeshift stage just a few hundred metres from the Pangong Tso lake.
It was the Defence Minister’s first visit to Ladakh after the bitter border face-off between India and China began in multiple locations following a violent clash between the two sides on May 5 in the Pangong lake area.
The visit also came a fortnight after Prime Minister Narendra Modi made an unannounced visit to Ladakh during which he asserted India’s firmness in dealing with the border row with the neighbouring country.
(ndtv With inputs from PTI)