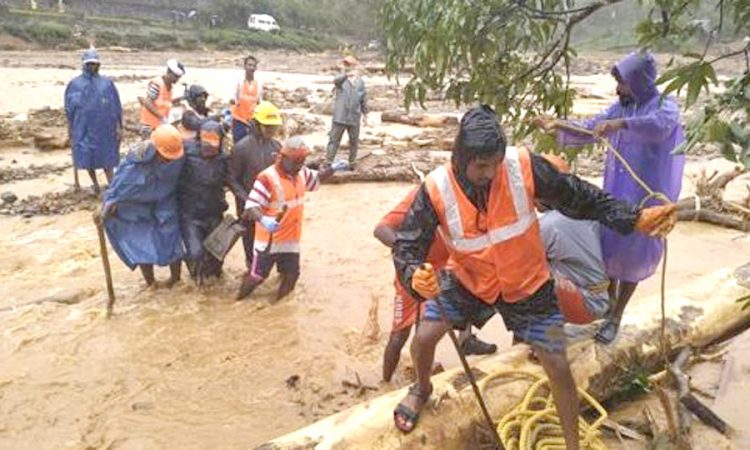 Chennai/Thiruvananthapuram/Bengaluru/ August 10: The flood situation in South India continued to remain grim on Saturday, with Kerala and Karnataka being the worst hit – as 83 people have so far lost their lives in both states.
In Kerala, the toll climbed to 57 on Saturday even as more than 1.65 lakh people have been displaced from their homes.
Chief Minister Pinarayi Vijayan said in a tweet that “57 lives have been lost. There are now 1,318 flood relief camps operating across the state. These camps host 1,65,519 persons from 46,400 families”.
He said 80 landslides had occurred in eight districts in the last three days.
The maximum deaths were reported from Malappuram district– 19, while 14 people lost their lives in Kozhikode and 10 in Wayanad.
Official sources said 198 houses were fully damaged and 2303 partially.
Congress leader Rahul Gandhi is likely to visit his constituency–Wayanad, which is among the worst affected, tomorrow to get first hand information about the rain havoc.
Many people are still feared trapped under debris following major landslides that hit Kavalappara in Malappuram and Puthumala in Meppadi in Wayanad
A total of 1,318 flood relief camps have been opened across the state, with 46,400 families displaced from their homes by the floods and rains being shifted there.
A red alert has been issued in eight districts of Ernakulam, Idukki,Palakkad, Malappuram, Kozhikode, Wayanad, Kannur and Kasargod.
As rescue operations were on in Kavalappara, another landslide occurred in the region on Saturday due to which search operations have been halted.
One of the four shutters of the Banasurasagar dam, located about 21 km from Kalpetta in Wayanad, one of the worst affected districts, was opened to discharge excess water and people on the banks of the Kabini river have been asked to be cautious.
One of the largest earth dams in India and the second largest of its kind in Asia, Banasurasagar impounds the Karamanathodu tributary of the Kabini River.
The government allayed fears of opening dams, saying all the major reservoirs had enough storage capacity.
“Not all dams are full. We have enough storage capacity in all major dams of the state. As of now only 30 per cent of water is there in Idukki dam. Last year it was nearly 98 per cent,” he added.
Rail services in Kerala remain cancelled while flight operations from Kochi international airport, suspended following inundation, will resume at noon on Sunday.
“Airport is ready. Flight operations will resume at noon tomorrow. That is ahead of the deadline. Airlines are instructed to facilitate services accordingly,” a Cochin International Airport Limited spokesperson said.
The deluge continued in Kerala even as the state has not yet fully recovered from the extensive damage caused by the floods of August 2018 that claimed over 400 lives and left lakhs homeless.
Karnataka too saw no let-up in rains, with 26 people losing their lives so far in rain related incidents.
Most rivers are in spate and Chief Minister B S Yediyurappa has termed the natural calamity the “biggest” in 45 years.
The state government pegged the losses caused by rains and floods at Rs 6,000 crore and Yediyurappa revealed that his government has sought Rs 3000 crore as relief from the Centre.
Officials said 26 people had lost their lives, while as many as 2.35 lakh people have been moved to safety. 222 head of livestock had perished and 44,013 head of cattle rescued and provided shelter, they said.
Rescue and relief work was being carried out by teams of personnel, comprising NDRF, and the armed forces, he added.
Meanwhile, landslides were reported near Maranahalli in Sakaleshpur, official sources said.
The entire Pane Mangaluru village in Dakshina Kannada district was inundated by the swollen Netravati river, they said.
Reports said several houses in Bantwal in that district, including that of former Union Minister Janardhan Pujari, were inundated. However, he and his family members were rescued.
In neighbouring Tamil Nadu, the state government pressed the IAF into service to rescue stranded people from the worst-hit Avalanchi in Nilgiris district. in Nilgiris district, a flood alert has been sounded in five villages following discharge of surplus water from Pykara dam, which reached its full capacity of 96 feet due to incessant rains over the last one week.
The water in the dam and adjacent Mukurthi dam was steadily rising for the last two days and Pykara started overflowing as the capacity crossed to 98 feet, official sources said.
To avoid any eventualities, officials released surplus water from the dam this afternoon and District Collector Innocent Divya ordered people living on the banks and low lying areas in Mayar, Masinagudi,Thengumarada to move to safer places.
The Indian Air Force rescued 11 people, including two infants from rain-battered Avalanchi and shifted them to Coimbatore for medical help.
A Sarang helicopter of the Indian Air Force station in Sulur conducted two missions, even as the crew had to negotiate inclement weather, a Defence spokesperson said.
As many as “11 people requiring medical help have been shifted to Coimbatore,” he said adding two of these were infants.
The Sarang crew also did an aerial survey of the damage and airlifted “large amount of food and relief material to the affected site,” he added.
Chief Minister K Palaniswami said about 5,500 people in Nilgiris have been moved to relief camps, while 15,000 others have moved out and are staying with their relatives elsewhere.
A landslide occurred at Panthalur and restoration work was on, he said. (PTI)