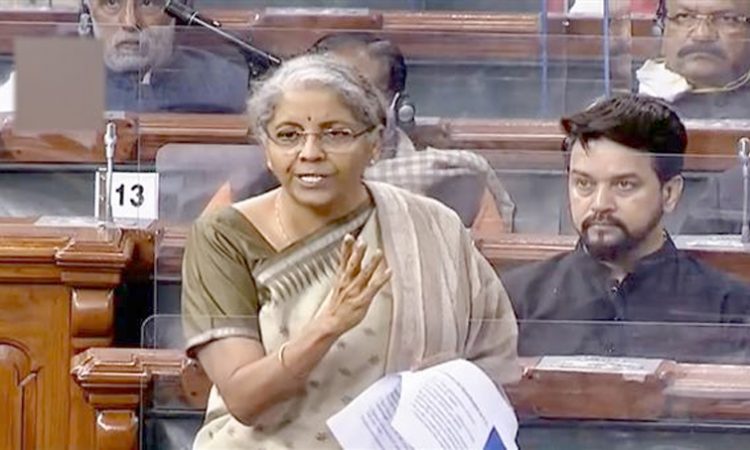 Replying to the general discussion on Budget in Lok Sabha, she said the former Congress chief was creating fake narratives but does not have patience to listen to replies on allegations levelled against the government.
“We need to recognise these two tendencies of the Congress party. One is creating fake narratives and second, lack of belief in a democratically elected Parliamentary system.
“In banks, you did phone banking and left huge NPAs. This is one tendency, create institutions and use them for ‘Hum Do Hamare Do’ and at the end of the day keep accusing others,” she said.
‘Hum Do Hamare Do’ expression was used by Gandhi in his speech on Thursday, during the general debate on the Budget, referring to the fact that only four persons are ruling this country including two business houses.
Retorting to this, the Finance Minister said this expression fits on the Gandhi family.
With regard to the second tendency of Congress, she said, “we will put allegations, use abusive language, but when under Parliamentary procedure they have to respond to… they only shout and walk out.”
She criticised the Congress for inconsistency in their approach in the two houses of Parliament.
“The same party in Rajya Sabha takes part in Budget discussion and asks questions and listens answers… why that does not happen in Lok Sabha… why take different positions in Rajya Sabha and Lok Sabha… what is this,” she wondered.
Responding to Rahul Gandhi’s speech on Thursday, during which he talked about farm laws but declined to speak on the Budget, she said, “he is probably becoming a doomsday man for India.”
The Minister further said that Gandhi laid the “foundation” but did not speak about the Budget during the discussion on it.
Sitharaman said she wanted Gandhi to speak on 10 issues, but was disappointed as the Congress leader made no mention of them.
“I wanted to know from the Congress why it took a U-turn on the farm laws but no reply came,” she said, adding that Gandhi did not tell the House why Congress governments in Rajasthan, Madhya Pradesh and Chhattisgarh did not waive farm loans as promised in their manifesto.
Sitharaman further said Gandhi did not talk about the farmers issue in Punjab, where Congress is in power and the steps being taken by the government with regard to stubble burning.
Gandhi also did not refer to any clause in three agri bills which was against the farmers, she said.
She was expecting that he would announce that Punjab has removed Rs 5 lakh penal provision from its contract farming laws but this announcement did not happen.
Congress party is only concerned about “Hum Do and Hamare Do,” Sitharaman said adding that she expected Gandhi to return the land which was taken by someone from farmers at pittance.
The exact phrase used by Sitharaman to describe the person was later expunged by the Chair.
Also, she added, Gandhi did not say anything about the statement of former Prime Minister Manmohan Singh who had advocated reform of the Agriculture Produce Marketing Committee (APMC).
She also accused Gandhi of insulting constitutional authorities recalling the incidence when the Congress leader tore an ordinance promulgated by its own government led by the then Prime Minister Manmohan Singh.
She regretted that the Congress has joined the break India fringe group and was continuously creating false narratives to demean India.
“Continuously he created fake narratives… Gandhi said so many people will die due to COVID-19… I will constantly say things which will demean India, which will show India in a poor light… and insult India. When there was a crisis on the border, instead of talking to us, they were talking to the (Chinese) Embassy and inquiring about the border,” she said.
Responding to the charge of crony capitalism, the minister said, the government under Narendra Modi works for common people and not for cronies.
Reeling out statistics to show the government’s pro-poor policies, she said, measures of providing toilets, houses and MUDRA Yojana, rural roads were not meant for cronies.

“We don’t do work for any cronies, we work for the common citizen who believes in the Prime Minister…Our cronies are the common janta of the country,” she said.
She also took on the Congress for accusing that the government is favouring certain industrialists and asked the opposition party to explain how a particular project in Kerala was awarded on invitation basis to one of the industrialists.
Adani Ports and Special Economic Zone Ltd, India’s largest port developer and part of the Adani Group, in December 2015 formally began development of the international transhipment project in Vizhinjam in Kerala. (PTI)