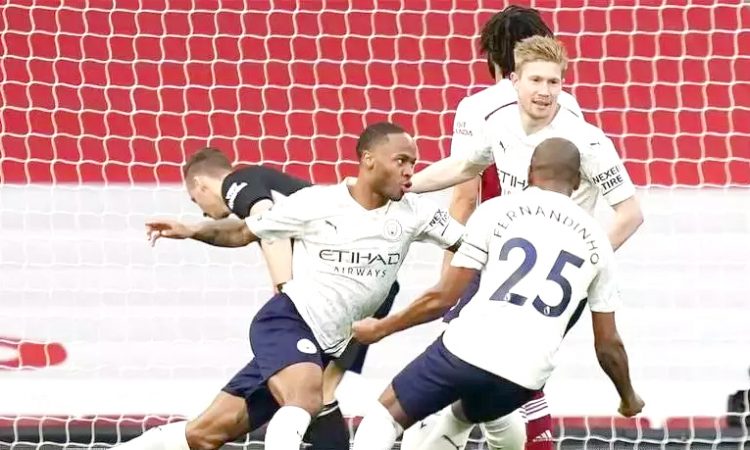 LONDON, February 22: The Manchester City winning machine ploughed on relentlessly towards the title with a 1-0 Premier League victory over Arsenal courtesy of Raheem Sterling’s goal after 75 seconds on Sunday.
Sterling’s header from Riyad Mahrez’s cross caught Arsenal cold and was enough for City to claim an 18th consecutive win in all competitions and preserve their 10-point lead.

The visitors dominated possession and created numerous chances but were unable to kill off Arsenal, although City keeper Ederson was rarely called into action.
Pep Guardiola’s side’s 13th successive league victory lifted them to 59 points from 25 games.
Arsenal’s third defeat in four games left them in 10th spot.
“Every game you are not going to win games 2-0, 3-0, 4-0, sometimes when you win 1-0 it is so good,” Guardiola said after his side equalled a club record of 11 successive away wins they also achieved under the Spaniard in 2017.
“We have to realise what we are doing is so difficult. It is a struggle, a fight, behind the ball and that is why we like this result. “It is one more, one more.
“We think all the time about the next one.”
Although the scoreline looked close, Arsenal barely laid a glove on the league leaders and could have been buried in the opening 25 minutes in which City were totally dominant.
Arsenal managed only one effort on target and appeared for most of the game to be protecting a narrow loss.
“When we conceded the first goal it put us in a difficult situation. It was tough. With their formation and players they use they are really comfortable,” Arsenal manager Mikel Arteta, Guardiola’s former assistant at City, said.
“We didn’t do it in the first 10 minutes.”
AERIAL POWERS
The surprise was that the winner came from the head of Sterling, who are 5ft 7ins is not known for his aerial powers.
He demonstrated great spring, though, to climb high and glance in Mahrez’s pinpoint cross with Arsenal’s defence looking on. Sterling should have scored again five minutes later when Kevin de Bruyne, back in the starting lineup for the first time after a month-long injury layoff, slid him in but he over-elaborated and the chance went begging.
Joao Cancelo then got in behind Arsenal’s defence but his cut back failed to pick out a City player.
As City’s pressing game relented slightly Arsenal did manage to stem the tide without really threatening.
Arsenal failed to mount any sustained pressure, however, and City were comfortable after the break and should have added a second. Ilkay Gundogan was denied by Bernd Leno, De Bruyne sliced one effort over and Cancelo slid s shot narrowly wide after a neat interchange with Gabriel Jesus.
Sterling’s strike proved enough, though, to secure a routine victory for a City side who look unstoppable.
Marcus Rashford inspires Manchester United to 3-1 win over Newcastle

Marcus Rashford’s skill helped Manchester United to a 3-1 home win over Newcastle United in the Premier League on Sunday as the England forward scored one goal and had a hand in another.
Looking shaky at the back and lacking edge up front in the first half, United were fortunate not to fall behind before Rashford fired them ahead out of the blue in the 30th minute.
Newcastle hit back through Allan Saint-Maximin six minutes later before a 57th-minute strike by Daniel James and a Bruno Fernandes penalty secured their second league win in the last six matches.
United moved back into second spot on 49 points from 25 games, 10 behind leaders Manchester City and ahead of third-placed Leicester City on goal difference.
Newcastle stayed 17th on 25 points, three ahead of Fulham who occupy the last relegation spot, after an eighth league defeat in 10 games.
James, who also scored in Thursday’s 4-0 win over Real Sociedad in the Europa League round of 32 first leg, was delighted after making the most of a rare start.
“It is a turnaround,” the Wales winger told BT Sport.
“There was a moment last season when I maybe was not performing as well as I wanted to do. I kind of lost my way a bit. I have been working with the coaches to get me back to myself and I’d like to think I’ve got there now.”
United were pegged back and defended unconvincingly at times before Rashford twice beat defender Emil Krafth with neat footwork and fired a crisp low shot past goalkeeper Karl Darlow inside the near post.
Saint-Maximin forced David De Gea into a diving save but the United keeper was powerless moments later when Harry Maguire’s poor clearance fell kindly to the Newcastle striker who swept the ball into the roof of the net.
United looked sluggish in the early stages of the second half but struck from out of nowhere as a Nemanja Matic pass was touched on by Fernandes to James who rifled the ball past Darlow from eight metres.
Fernandes sealed United’s win with a confident spot-kick awarded when Joe Willock tripped Rashford after he bedazzled the Newcastle player with sublime close control in the area. (Reuters)