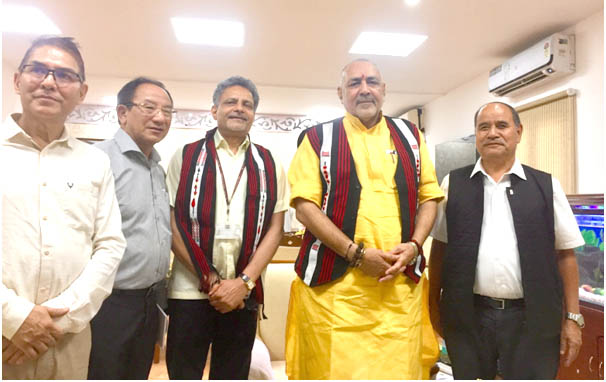 Dimapur, July 11: Advisor for Department of Animal Husbandry & Veterinary Services and Women Resource Development, Government of Nagaland, R. Khing today called on Union Minister of Fisheries, Animal Husbandry & Dairying, Giriraj Singh and his Joint Secretary, O P Choudhury at New Delhi.
R Khing congratulated the Union Minister on taking over the newly created Ministry i.e. Ministry of Fisheries, Animal Husbandry & Dairying. The Advisor briefed the Union Minister about the potential of Animal Husbandry in the State because of its rich natural vegetation and food habit of the people.
He also informed the Union Minister about the importance of Piggery & Mithun in the State which is a part and culture of the State and the need to promote and conserve these livestock to meet the increasing demand in the State. For which, he requested the Union Minister to provide all possible help from the Govt. of India for promotion of Piggery, Dairy & Mithun Conservation & Development for the state.
The Union Minister welcomed the Advisor and his team and said that he is already in touch with ICAR for Mithun Development in Nagaland and expressed the intention of the Government of India in providing full support for Mithun development & conservation.
He also said that Nagaland being a State where pigs demand is very high, he intends to make Nagaland and the other NER States to be saturated with pigs so that NER will be self sufficient.
He suggested that the State may replicate the Meghalaya Model on Pig Value Chain involving Cooperative Societies for production, management, slaughtering and marketing.
Further, Union Minister mentioned that incorporation of Quality Protein Maize (QPM) and Moringa in the State can reduce the cost of production of pigs by reducing the concentrated / industrial feeds. Minister also suggested that the State should encourage silage making through usage of QPM along with it biomass through fodder development.
The Union Minister had assured to take up the proposal submitted by the State.
In the latter part of the day, the Department officers also called on Ashok Pillai, Chief Director, NCDC at his office New Delhi and discussed the modalities and possibilities for promoting Pig Value Chain through Credit Linkage in the State.
Khing was accompanied by Alan Gonmei, Commissioner & Secretary along with a team of officers from the Department. (Page News Service)