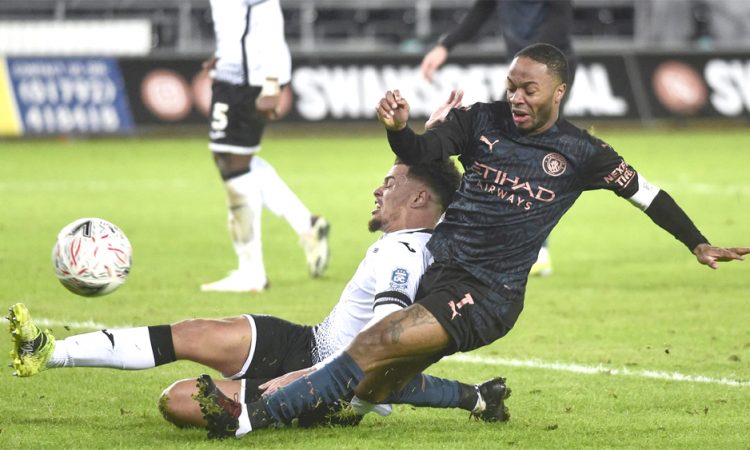 SWANSEA, February 11: Manchester City continued their quest for a historic quadruple of trophies by easing into the FA Cup quarter-finals with a 3-1 win at Championship promotion challengers Swansea on Wednesday.

Kyle Walker, Raheem Sterling and Gabriel Jesus were on target for the visitors, who extended their winning run in all competitions to 15 games.
Pep Guardiola’s men hold a five-point lead with a game in hand at the top of the Premier League, face Tottenham in the League Cup final in April and resume their challenge to win a first Champions League in the last 16 against Borussia Monchengladbach later this month.
Despite the congested schedule, Guardiola characteristically named a strong side for the trip to south Wales with Sterling, Rodrigo, Bernardo Silva and Ilkay Gundogan retaining their places from Sunday’s 4-1 win away to Liverpool.
Walker has lost his place as first choice right-back due to Joao Cancelo’s excellent form.
The England defender took his chance to impress with a rare goal to open the scoring on 30 minutes when his tantalising cross avoided everyone in the middle and nestled in the bottom corner.
City quickly turned their complete control of the game into a commanding lead inside the first five minutes of the second half.
Firstly, Rodrigo released Sterling to slot home his 11th goal of the season with a calm finish.
Jesus then controlled and slammed home Silva’s header back across goal, allowing Guardiola to replace Sterling, Silva and Gundogan early with an eye to Tottenham’s visit to the Etihad on Saturday.
But Rodrigo hobbled off an ankle injury 20 minutes from time that will concern the City boss.
Morgan Whittaker pulled goal back for the Swans 13 minutes from time, but Steve Cooper’s men can now fully concentrate on trying to return to the top flight.
Kelechi Iheanacho sends Leicester through with late goal

Kelechi Iheanacho struck deep into stoppage time to send Leicester City into the FA Cup quarter-finals with a 1-0 victory over Brighton & Hove Albion on Wednesday.
Extra time loomed when Ihenacho was picked out at the far post from a corner and he headed home.
Both sides had goals ruled out within the space of a minute in the second half, Andi Zeqiri for Brighton and Cengiz Under for the hosts.
Leicester also suffered a blow when James Justin was carried off on a stretcher after jarring his knee.
Iheanacho’s late intervention, however, made sure it was Leicester who moved through and they were joined in the last eight by the Premier League’s bottom club Sheffield United who beat Championship side Bristol City 1-0. (AFP/Reuters)