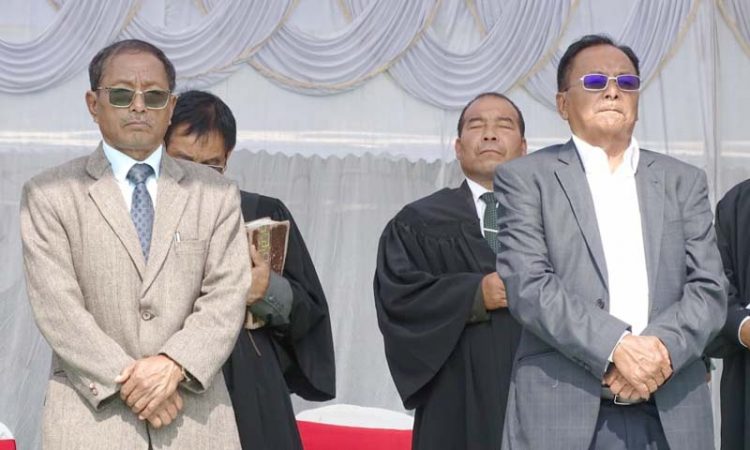 Dimapur, February 11: Qhehezu Tuccu has been elected Chairman/Yaruiwo GPRN of NSCN and Tongmeth Wangnao as Vice-Chairman NSCN/Vice-President, GPRN on Monday at the National Hoho of the National Socialist Council of Nagalim (NSCN) at Camp Hebron.
Ato- Kilonser, Th. Muivah pronounced the declaration of the election of Qhehezu Tuccu as chairman and Tongmeth Wangnao as vice chairman, NSCN who shall also be the president and vice-president of the GPRN for a term of 6 years as per the Yehzabo.
Till elected to the highest posts, the two NSCN leaders were both members of the collective leadership.
The oath of allegiance and secrecy to the two elected leaders was administered by NJB Convener (Chief Justice) Khriesarokho Peseyie. Rev Seksim Kasar, general secretary, CNC blessed the two elected leaders.
Nagaland Page had first reported that Q Tuccu will be appointed chairman of the NSCN in the January 31 issue of the paper. After the Nagaland Page report, other local media outlets, citing their NSCN sources, carried reports the next day that no one has been shortlisted so far for appointment as NSCN chairman.
Again on February 2, Nagaland Page had reported that veteran Naga nationalist Tongmeth Wangnao Konyak is most likely to be the next vice chairman of the National Socialist Council of Nagalim (NSCN).
Both Nagaland Page reports, based on NSCN sources, were proven true when Q Tuccu was elected chairman and Tongmeth Wangnao elected vice chairman in the National Hoho of the NSCN/GPRN on Monday.
Q Tuccu was born on February 20, 1945 and joined the Naga National Service in the year 1980. He is from Nihoto village, Dimapur of UT. Beginning from 1982 as acting chairman, UT, he has held various other important posts in the capacity of Kilonser like Chaplee, Keya Affairs, Forest & Environment and Mines & Minerals and member of the Steering Committee. He was made member of the Collective Leadership in 2013.
Tongmeth Wangnao was born in 1958 and joined the Naga National Service in the year 1987. Till 1995, he was in the service as secretary before he was elected tatar in 1995. Beginning from 1998, he held important posts in the capacity of Kilonser of Chaplee, Kilo, Education, MIP, as speaker, Tatar Hoho, member of the Steering Committee and NJB convener. He was made member of the collective leadership in 2013.
On being elected, Qhehezu Tuccu gave his commitment that he will not deviate from his stand and go against the will and decision of the Nagas.
Tongmeth Wangnao admitted that notwithstanding the fact that though there are many senior members who deserve the covetous post, he was given the privilege to reach this far due to the co-operation and support he received from the members. He appealed to the members to stand by him, feeding him with all the ideas and advice that will further uplift the national movement in the manner Naga people desire.
It may be mentioned that the post of chairman of NSCN fell vacant after the demise of Isak Chishi Swu on June 28, 2016 while the post of vice-chairman fell vacant following the demise of late Khole Konyak last December. (Page News Service)