Punjab to supply live pigs to Nagaland worth Rs. 200 crore per annum 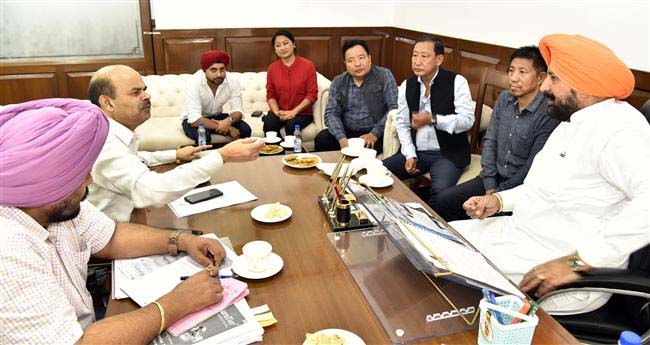 Chandigarh, September 11: Punjab Animal Husbandry Minister, Balbir Singh Sidhu today said that the state of Punjab would soon start supplying live pigs to the state of Nagaland at the rate of Rs 8000 per pig per month thus earning Rs 200 crore annually for the pig farmers of Punjab. After holding a meeting with high level delegation of Nagaland Government, he said that the memorandum of understanding in this regard would be signed in the coming days. Sidhu said that the delegation expressed keen interest in importing live pigs from Punjab as the people of Nagaland consider pork meat of Punjab full of nutritious value, hygienic and healthy as compare to the pork of others part of the country. He said that as per the understanding reached out in the meeting 8000 live pigs would be supplied every month to the Nagaland. He said that to start with 100 live pigs would be sent to Nagaland which would be put on exhibition at different places of Nagaland to create interest among the people and to generate more demand. He said that the health certificate of the pigs to be supplied to Nagaland, would be issued by the Punjab Government. Sidhu said that the deliberations for the supply of Punjab’s chicken and fish to the Nagaland were also held during the meeting. Proposal to impart training in Punjab to the progressive farmers and veterinary doctors of Nagaland was also put forward by Balbir Singh Sidhu before the visiting delegation. Later on the delegation was taken for the visit of pig farm at Nabha and Guru Angad Dev Veterinary and Animal Sciences University Ludhiana. Nagaland delegation included Principal Secretary to the Nagland Government, Lhoubeilatuo Kire, Advisor to the Nagaland Government, Bongkhao aKonyak, Joint Director of the Nagaland Government, Dr. Anungla Imdong Phom, Advisor marketing Nagaland Government, Rajpal Singh Arora and Consultant Richard Belho. From Punjab’s side Director Dairy Development, Inderjeet Singh, Director Fisheries, Madan Mohan and senior officers of the Animal Husbandry Department were present in the meeting. (Agencies)

Ban imposed on supply of sand from Assam

School reopening: If students prefer online classes, allow them to do so, says Centre

MSP will be hiked continuously in coming years; No threat to farmers’ land: Rajnath Singh