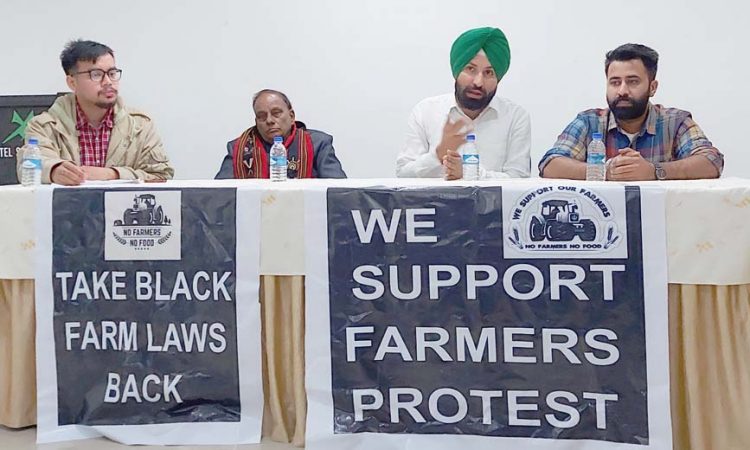 Reiterate demand to repeal the laws

Dimapur, January 17: Farmers from Punjab who are protesting the Farm Laws have now embarked on a tour to different parts of the country to create awareness about the dangers of the laws enacted by the Government of India.

Since November 26, the farmers from Punjab and Haryana are demanding repeal of the three farm laws, which were passed by the Government last year. On Saturday two farmers from Punjab and one from Assam reached Nagaland to meet the farmers here and make them aware about the Farm Laws, which according to them are not beneficial for the farming community.
The farmer leaders are Manjinder Singh Randhawa, Sukhjinder Singh Gill and Abhilash Rajkhowa.
Talking to media persons here at Hotel Saramati on Sunday, the farmers from Punjab said that they want to create awareness about the farm laws and the MSP (Minimum Support Price), as many farmers in the country are not aware of it.
Manjinder Singh Randhawa said that the farmers protest has been going on in Delhi since November 26 where farmers from Punjab, Haryana and Uttar Pradesh are participating. He said that their protest would continue till the Government repeals the farm laws.
On Government’s claim that farmers from other states are not voicing against the farm laws, Manjinder said that when they met the farmers of other states, they found that the farmers are not aware about the MSP. “So we are travelling to create awareness about the farm laws,” he said.
The visiting farmers told media persons that they respect the Supreme Court and the Constitution of the country, but they would not agree to the Committee formed by the Supreme Court recently as their demand for repealing the farm laws is with the Centre. They said the Centre has enacted the farm laws, therefore, their fight is with the Central Government.
Explaining about the disadvantages of the new farm laws, the farmers said that only Punjab and Haryana farmers are getting the MSP. “We have come to know that farmers do not know about it. Farmers do not get the benefits as there are no Mandis in other states. So, we are trying to create awareness,” one of the farmers said adding, “In Punjab and Haryana, there are Government Mandis where they sell their produce, but in other states, it is not there.”
They said since there are no Mandis, farmers do not get better price for their produce and incur losses.
They also raised concerns that private players will exploit the farmers under the new farm laws since they are not entitled to pay any taxes. They said under the new law, farmers would be compelled to sell their produce at lesser price.
A farmer from Assam, Abhilash Rajkhowa said that Government says it would remove the APMCs and farmers will not pay any tax, but in reality, government markets will perish and only private markets would be there, which would exploit the farmers.
He also said that MSP should be legalized all over the country and APMC should be created in all the states across the country so that living standards of the farmer can be raised.
The farmers said that the Centralgovernment is no ready to repeal the farm laws and is talking about amendments, which the farmers cannot accept. They said during the meetings with the government, they only harass the farmers and press them for suggestions for amendments. “We want repeal of the farm laws,” they stressed.
When asked whether they would attend the meeting convened by the Supreme Court appointed committee, they said they did not demand for such a committee. “As a party we cannot ignore it, but we say that we have no issue with the Supreme Court but with the Government.”
They also alleged that the 4 members in the Committee are pro-Government, therefore they do not want it.
When asked when they are likely to withdraw the protest, they said unless the farm laws are repealed, they will not withdraw the protest.
The farmers from Punjab have so far travelled to Uttar Pradesh, Bihar, West Bengal, Assam and Nagaland. Tomorrow they will reach Manipur and then proceed to Mizoram to raise support for the farmers’ community.

Claiming that they received good support from farmers in Assam, the visiting farmers said they want the farmers of the Northeast to go to Delhi if they can or organize such protests in their own state.
They also said that they do not want any political interference in their peaceful protest.
President of Bharatiya Farmers Agro Business Development Corporation Ltd, P H Tripathi and his colleagues were also present.
(Page News Service)