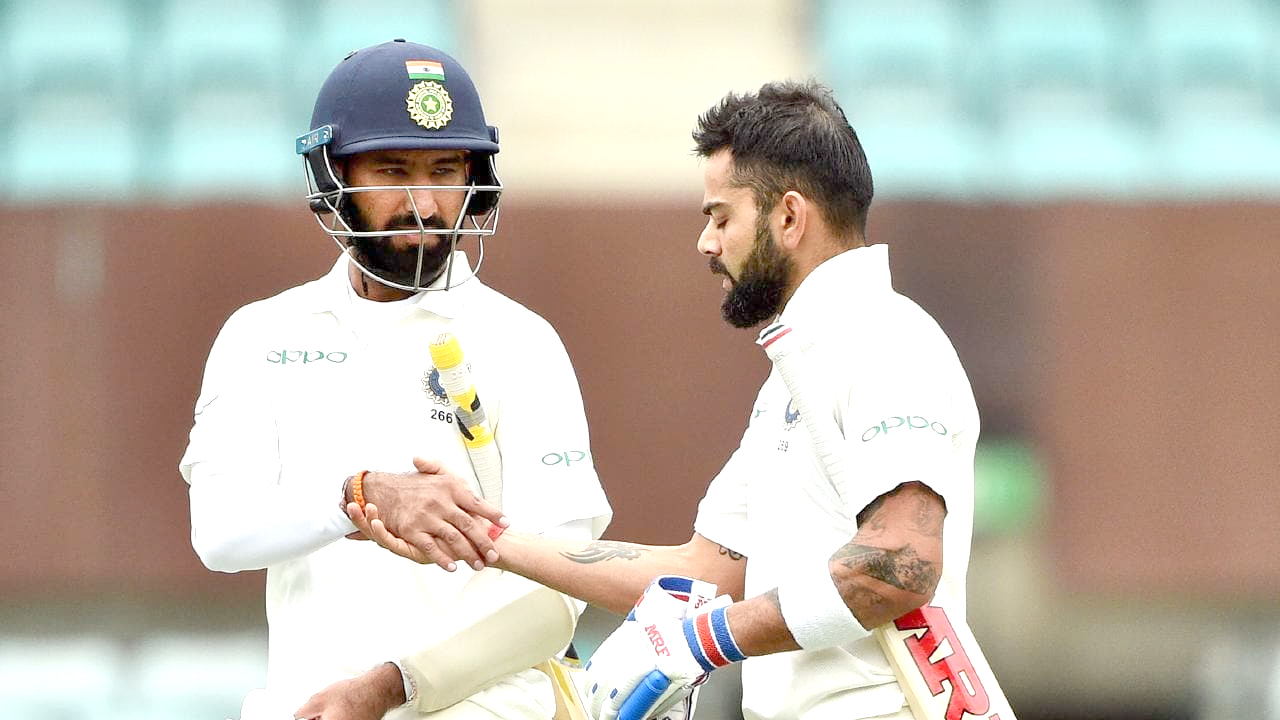 ADELAIDE, December 8: India built a 166-run lead over Australia on the third day of an absorbing opening Test in Adelaide on Saturday with dangerman Cheteshwar Pujara not out 40, although the late wicket of master batsman Virat Kohli gave the home team a glimmer of hope.
At stumps, the visitors were 151-3, adding to their first innings total of 250. Ajinkya Rahane was not out one, alongside Pujara who scored a gritty first innings century.
It was looking ominous for Australia with Kohli and Pujara compiling a 71-run third-wicket partnership, but spinner Nathan Lyon got a massive breakthrough when he snared the Indian skipper for 34 near the close of play.
Australia were dismissed for 235 just before lunch, with Travis Head top scoring on 72 on a day hit by rain delays, leaving them 15 runs adrift.
India got off to a solid start, with KL Rahul and Murali Vijay enjoying a 63-run partnership. Both failed to fire in the first innings and are battling for one opener’s spot once the injured Prithvi Shaw is fit again.
On a difficult batting track, Josh Hazlewood bowled four straight maidens to keep them contained before they began finding their range.
Rahul hit a big six off Pat Cummins as the pair grew in confidence and they were racing along before Mitchell Starc got enticed Vijay into nicking an attempted drive to Peter Handscomb in the slips and he was out for 18.
Rahul played some audacious strokes, including a reverse sweep, before a loose shot to a Josh Hazlewood ball found a big edge and he was caught behind for 44 by Tim Paine.
The unflappable Pujara crucially survived two decisions by the umpire giving him out, with both reversed on review in a cruel blow to Australia.
In the first, he was initially dismissed caught behind off Lyon on eight, and in the second was adjudged out lbw, also to Lyon, on 17.
Master-blaster Kohli, who emerged to boos from a section of the crowd, shunned his trademark flamboyance to grind out runs before jabbing at a short ball from Lyon and Aaron Finch took an easy catch.
On the way, he reached another milestone, joining a select few Indians — including Sachin Tendulkar and Rahul Dravid — to score 1,000 Test runs in Australia.
Earlier, Australia added just 44 runs to their overnight 191-7. (AFP)