Page Staffer
DIMAPUR, SEPTEMBER 28: With less than a month remaining for Durga Puja, one of the most important festivals for Hindus, markets in Dimapur continue to wear a deserted look and shop owners are not very optimistic that there would be much change in the scenario in the days to come.
On Monday only a fraction of the usual crowd was seen in Dimapur’s Hong Kong Market, which is one of the busiest markets, regardless of the time of the year.
A shop owner, who wished to remain anonymous, told Nagaland Page that compared to last year’s festive season, this year there is almost a 60% decrease in sales as people are cash-strapped and the little they have go towards essentials. He, however, said hopefully that there is still time and the market might improve though he was realistic enough to concede that it would not be the same like previous years.
A sales person mentioned that while people being cash-strapped is a factor, there are other additional factors at play and the most detrimental of all is the restrictions on transportations. According to him the absence of inbound trains has cut off a big chunk of customers from places like Bokajan, Sarupathar, Hojai, Haflong, Diphu, etc. who usually flock to Dimapur before the Pujas each year for shopping. Further, there are also little or no customers from other districts of the state.
He said that to a certain extent the odd-even rule in place is creating further inconvenience to customers.
It is estimated that due to the pandemic the cost of procurement of goods for wholesalers here have increased by 3% and consumers are paying at least 5% more on an average than what they would have paid under normal circumstances. Also, it now takes 7 to 8 days more for goods to reach Nagaland.
He also informed that to the best of his knowledge, a number of Puja committees are hesitant to either organize Pujas this year or are opting to keep the celebrations as minimal and private as possible.
HSS awaits responses
The uncertainty surrounding the Pujas in Dimapur is now part of the daily conversation among the celebrants here and it is not yet certain how many Pujas are going to take place at Dimapur and how the various committees, which are planning to organize the Pujas, would be handling the crowd at a time when COVID-19 cases continue to trend upwards.
Gopal Sharma, President of Hindu Seva Samiti told Nagaland Page that a proposal has been submitted by the Samiti to the Deputy Commissioner and the Commissioner of Police, Dimapur, and they are awaiting responses to chalk out the plans.
Sharma said that the situation this time is new and critical hence even the report of a single case can throw things into disarray hence decisions relating to the Pujas cannot be taken unilaterally therefore response from the authorities, guidelines, and SOPs are awaited.
He said that the number of Pujas that will be organized would only be known once responses and new guidelines come, after which a meeting will be held with the committee members, list will be prepared, and the list will be submitted to the concerned authorities.
Last year, a total of 53 Pujas were held at Dimapur.
Idol makers at the crossroads 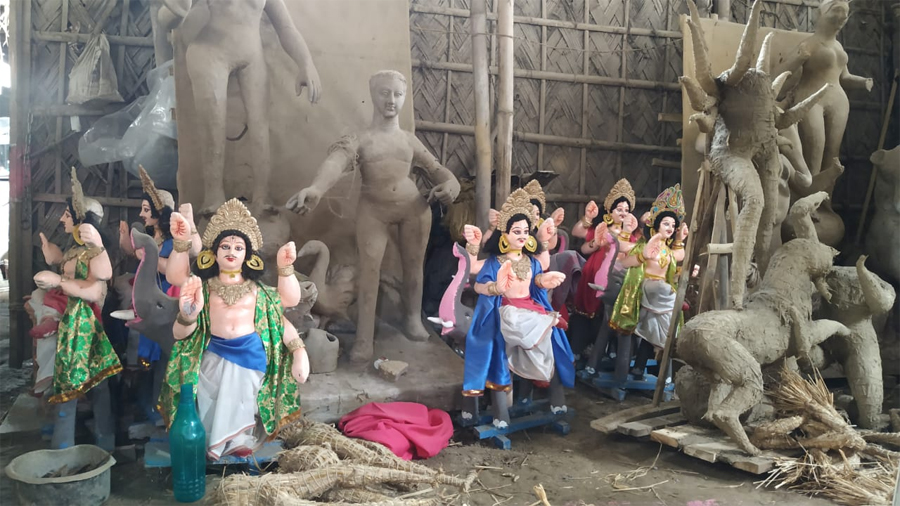 Idol-makers in Dimapur are also at the crossroads as they await committees to place orders but the committees are awaiting a signal from the Hindu Seva Samiti and administration to make the move.
A second generation idol-maker in Dimapur told Nagaland Page that till the last week of September, he has only received orders for only 5 idols for the Pujas, which is less than one-third of what he would usually receive by this time of the year and it would be a Herculean task for them to prepare a large number of idols together if the guidelines everyone is waiting for take any longer, and if the weather, which is critical for idol-making, is inclement, it would be difficult for him and his team to meet the delivery deadlines of the orders.
He said that for an idol to be prepared it takes a minimum of 7 days and inclement weather can easily impact adversely by increasing the number of days.
He said idol makers wait for this season and preparations for Durga Puja start from the month of March but this year business has been down and the cost of raw materials have also increased.
In his shop, a good number of finished idols of “Lord Vishwakarma” were heaped at one corner surrounded by a number of idols for the Durga Puja in the initial stages of preparation. He said that the finished idols are those which couldn’t be sold during the Vishwakarma Puja, which was observed on September 17 last.
According to him, while in previous years he would sell around 250 idols for Vishwakarma Puja, this year he sold only 80. He opined that the loss the pandemic has caused will take years to recover.
When Nagaland Page contacted DC, Dimapur, Rajesh Soundararajan as regards the proposal submitted by HSS for Durga Puja, the DC said that the office is still processing it.