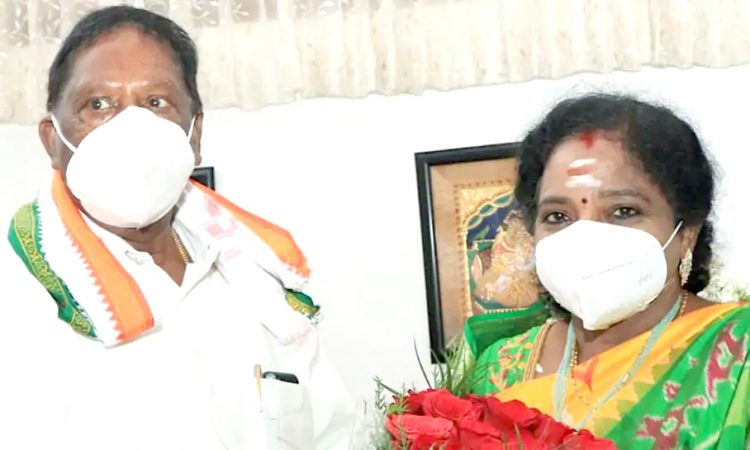 The Union territory’s Congress-led government lost its majority after one more party MLA quit the party on Tuesday.
The lieutenant governor’s direction came after the MLAs of the opposition parties led by the leader of the opposition and All India NR Congress (AINRC) founder-leader N Rangasamy called on her on Thursday and said that the government had lost its majority after four of the MLAs of the ruling party had resigned in the last 25 days and a ruling party’s MLA was disqualified last year. They briefed her that the government was reduced to minority and thus lost its legitimacy to continue and requested her to direct the government to prove the majority in the House. (TNN)
In an official communication, the lieutenant governor said the session of the legislative assembly shall be summoned on February 22 with a single agenda of ascertaining whether the government of the incumbent chief minister continues to enjoy the confidence of the House.
“Voting on the agenda shall take place by show of hands. The entire proceedings before the legislative assembly shall be videographed. The floor test shall be conducted by 5pm on February 22, and the proceedings shall not be adjourned/delayed or suspended at any cost,” said the note from the lieutenant governor’s secretariat.
The legislative assembly has 30 elected seats and three nominated seats. Five seats fell vacant after resignation and disqualification of MLAs. The ruling Congress party has 10 seats. The DMK with three seats and an independent have extended support to the Congress government. The strength of the ruling party and its allies is 14.
On the opposition side, the AINRC has seven and the AIADMK four. Three BJP functionaries were nominated as MLAs. The strength of the opposition parties in House is also 14.
The LG has directed the legislative assembly secretary to ensure that there is no breach of law and order in the course of the proceedings and the floor test is conducted in a peaceful manner.
She also directed the chief secretary and director general of police to make necessary arrangements to ensure that there is no restraint or hindrance on any of the MLAs in attending the session.
“Arrangements for their security shall also be provided. Proper law and order arrangements are to be made in the UT of Puducherry during the conduct of trust vote in the legislative assembly,” the communication said.
Chief minister Narayansamy called on the LG after the Rangasamy-led delegation called on her and held discussions.
The Congress-led government has seen a spate of desertions over the past few weeks.
Public works minister A Namassivayam and Congress MLA E Theeppainthan resigned and joined the BJP on January 25. Health and family welfare minister Malladi Krishna Rao, who resigned from the ministerial post on January 13, quit the MLA post on Monday. Congress MLA A John Kumar resigned on Tuesday. Congress MLA N Danavelu was disqualified by the party for indulging in anti-party activities. (TNN)