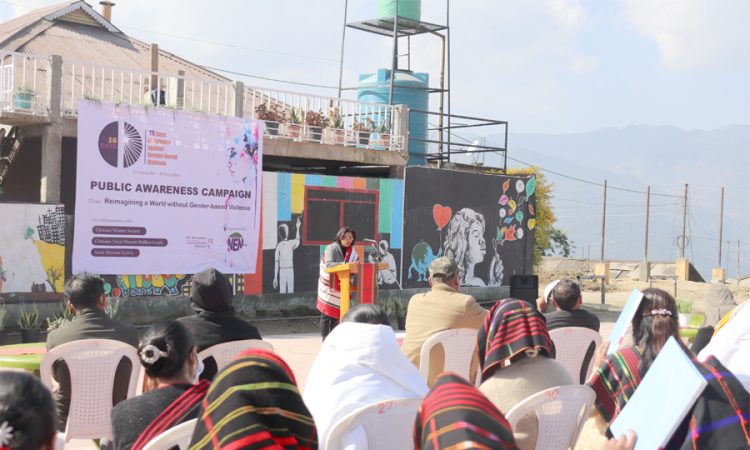 Dimapur, December 10: As the 16 days of activism against gender based violence, 2020 concluded on December 10, which is also the International Human Rights Day, NEN Nagaland in collaboration with Chizami Town Women Welfare Society, Sumi Women Society and Chizami Women Society held a public awareness campaign at Chizami village under the theme “Reimagining a world without gender-based violence”. The occasion saw a gathering of 104 participants including men, women, women collectives and community leaders.

Setting the context of the 16 days VAW campaign and International Human Rights Day, Seno Tsuhah NEN noted that ‘to build a world free from gender-based violence, it must start from home. This is where we must learn the universal human rights values of fairness, equality, justice, dignity and respect’.
She highlighted that COVID pandemic has disrupted all aspects of lives and livelihoods and women especially are affected the most. Reports suggest that domestic violence have increased five times during this pandemic, she said while calling on the need to eliminate violence against women.
“VAW isn’t just a women’s problem but a community problem and therefore we need the concerted efforts of diverse stakeholders to address the problem.”
Guest speaker Kezevino Krome, general secretary of Chakesang Mothers Association (CMA) highlighted the various forms of violence faced by women in both the private and public spheres, which remains unreported in most cases. She observed that women are often conditioned to believe that it is our fate to face such violence; instead of reasoning and resisting it, we accept it as the will of God and choose to remain silent.
Violence get normalized when we accept it, she said. “VAW is not the will of God, and therefore we must change our mindsets and attitudes. Silence will only give power to violence.”
She noted that majority of men in the world are good men but if they remain silent, they contribute to the growth of violence. “Therefore, it is essential that we engage boys and men in conversations on issues of gender-based violence,” she said.
Emphasizing the importance of men and boys as key stakeholders in addressing gender-based violence; Colo Mero in his solidarity speech stated, “No matter how much women have made progress or have achieved, violence against women (VAW) cannot be stopped until men and boys change. And the surest way to end VAW is to raise our sons to fear God.”
The programme concluded with a football match between members of Chizami Town Women Welfare Society, Chizami Women Society, Sumi Women Society and NEN staffs at Chizami local ground, and a volley ball match between NEN staffs and 14 Assam Rifle Chizami. (Page News Service)